Lila Tweet is a monster who is found on Main Street in Moshi Monsters. She is always shown with her best Pete Slurp having a picnic.

When you click on her picnic, you will start a game called Moshling Boshling, a minigame where you launch Moshlings such as Mr. Snoodle at the opposing Glumps.

Lila is a singer and was described as 'the best singer in her school'. She makes out to be confident about her singing too. Her melodies can hypnotise flutterbies, as shown in the Pick Your Path books.

Main
Pete Slurp and Lila Tweet are the City's youngest picknicking duo. These little monsters are best buddies - you'll rarely see the chewing chums without each other. Their hamper is packed full of goopendous goodies, but their favourite munchies by far are Lila's mum's Quenut Butter sandwiches! Yum!
Monstrous hobbies
When she's not picknicking, talented Lila loves to sing. This budding monSTAR is the best singer at her school! Clawsomely-adventurous Pete collects rare slugs, builds stuff and encourages Lila with her singing, despite being tone deaf!
You've been glumped!
The problem with picknicking all the time is that you're particularly prone to cake-thieving predators like the ghastly Glump Bloopy!
Data File
Hangout: Main Street
Catchphrases: "Nom, nom!"
Likes: Choir (Lila), Construction (Pete)
Often spotted: Mid-bite!
Notes

Lila Tweet spends her time picnicking with her friend Pete Slurp and checking her room for five star ratings. She's the best singer in her school and her mum makes the best Quenut Butter Sandwiches in Monstro City.

Lila is a light pink Monster, whose hair is in a repeating pattern of two colours which are both dark shades on pink. She has light blue eyes and a light blue beak, this means she could possibly be a bird (hence her name, Lila Tweet).

Lila also has a dark pink/purple T-shirt that matches up with a colour of her hair. Over it, she wears denim overalls with two shiny golden buttons. 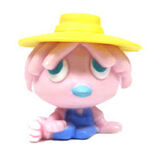 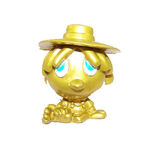 Add a photo to this gallery
Retrieved from "https://moshimonsters.fandom.com/wiki/Lila_Tweet?oldid=263113"
Community content is available under CC-BY-SA unless otherwise noted.