Lady GooGoo the Glitzy BooHoo is a former Moshling who used to belong in the Secrets set within the Moshi Monsters franchise before being replaced by Baby Rox. Lady GooGoo was a singing baby who was assisted by Simon Growl to be the next gooperstar hit. She was removed because of Lady Gaga suing Mind Candy in 2011.

She is a parody of Lady Gaga and has two songs, the first of which was 'Peppyrazzi', available in The Underground Disco, and her latest, The Moshi Dance.

Lady GooGoo's song, The Moshi Dance (2011), has been taken off iTunes, Moshi Monsters' Music Site and YouTube. The song has still been uploaded by other users and is thus available.

Say coochie coo to Lady GooGoo, the wah-wah-ing gooperstar who's set to take the Moshi World by storm! When she's not being pampered by her manager Simon Growl or dunking her rusks in milky milk, this blinged up baby is rocking the cradle with her techno lullabies and bustin' out cute moves. 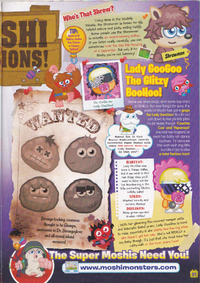 Bio
Some say she’s crazy, some say she’s a genius. One thing’s for sure, the Moshi world has gone completely gaga for Lady GooGoo! But it’s not down to her plinkity plink music (although ‘Coochie Coo’ and ‘Yaparazzi’ are real toe-tappers) or even her baby-ish dance routines. It’s because this wah-wah-ing bundle of joy is a fashion icon!

With her gleaming Rox-covered romper suits and futuristic tinfoil pram, Lady GooGoo is hard to miss, especially if she starts boohoo-ing when she doesn’t get her way. She’s not really a cry baby, it’s just that she must have her milky- wilk on the hour every hour.

Habitat:
Lady GooGoo was born in Nappy Valley, but if you want to find her these days you’ll need to listen out for her boo-hoo-ing in the hills overlooking Electro Lullaby Lake.
Likes
Mashed carrots and nursery rhymes. (Daily Growl)
Mashed carrots and her diamond encrusted dummy. (Magazine)
Dislikes
Noisy grown ups and broken rattles.

Lady GooGoo with her eyes revealed.

Lady GooGoo in her cot

Lady GooGoo next to Agony Ant at the Underground Disco.

Retrieved from "https://moshimonsters.fandom.com/wiki/Lady_GooGoo?oldid=288082"
Community content is available under CC-BY-SA unless otherwise noted.