Kazuki the Kabuki Kitikati is a Super Moshling in the Ninjas set in Moshi Monsters Egg Hunt. She is a cat who wears Japanese attire including a kimono, geta and shoes and an oil-paper umbrella.

Kazuki is hatched from a Super Moshling egg which appears in the middle of the set in the zoo when the player completes a Moshling set (with all four original Moshlings). The Bumbletron 9000 Deluxe hatches the egg with the help of a golden spoon.

Kazuki features in her own Moshi Twilight story, 'Kazuki's Silent Wish'. The Story features the Kabuki Kitikati attempting to find a quiet place to sleep during a night in Moshimo City, a city that never sleeps. Kazuki is the first Super Moshling to be mentioned in any capacity in the Moshi Twilight app.

The meaning of the name "Kazuki" derives from the Japanese terms "Kazu" meaning harmony and peace and "Ki" meaning brightness and hope. This relates back to Kazuki's personality and goal in 'Kazuki's Silent Wish'. 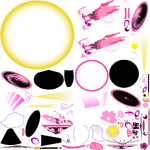 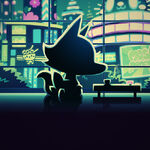 Rainy Umbrella Relaxation with Kazuki
Add a photo to this gallery

Retrieved from "https://moshimonsters.fandom.com/wiki/Kazuki?oldid=272090"
Community content is available under CC-BY-SA unless otherwise noted.