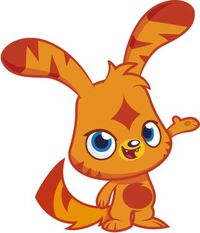 Katsumas are a type of adoptable Monsters in Moshi Monsters. They have natural health, so it's fine to leave them alone for 2-8 days, although they need to have food at hand and plenty of games to raise their health and happiness.

Mess with a Katsuma and you'll unleash a flurry of claws, jaws and lightning-fast moves! When Katsumas aren't bustin' choptastic moves, they're busy working on their super-smooth style!

Main
Katsumas are friendly but big-headed little monsters who love to be tickled. They look super-cute with big doe eyes, floppy ears and fluffy tails, but they can be fearless fighting machines if they're angry! Highly trained in martial arts, karate-chopping Katsumas are all claws, jaws and lightning-fast paws! Choptastic!
Fashion followers
When Katsumas aren't perfecting their chops and kicks, they like to hop down to Sludge Street to pick out the latest fangtastic fashions at Katsuma Klothes. These style-conscious critters love accessories that enhance their look without restricting their moves - for example, stylish trainers or sweatbands to keep the sweat from their paws.
Time out
Being a cool karate expert is hot work. Clawsome Katsumas take regular breaks and sip on thirst-quenching energy drinks.
Data File
Habitat: Monstro City
Catchphrases: "Clawsome!", Pawsome!", "Choptastic!"
Monster mates: Diavlo, Furi, Luvli, Poppet, Zommer
Notes

Katsumas are together with Poppets the top popular adopted species in Moshi Monsters and are thus much more prominently promoted in merchandise.

They are based on felines in behaviorism and bodily abilities, as they produce sounds similar to meowing and can emerge claws. They bear resemblance to rabbits in form, although this was preserved an insult in the fiction that mentioned it.

Katsumas are fast and talented in martial arts, specifically Karate. They are overall often associated with Japanese culture.

Katsumas are bold, fierce and feisty and have a very boastful nature. In fiction, Katsumas have been a bothering factor in the group dynamic of the main monsters, as shown with Axl Van Slap leaving The Fizzbangs due to being too full of himself and Katsuma in The Great Moshling Egg. In said movie, Dr. Strangeglove tried to make use of Katsuma's nature, referring to him as "that fame-hungry furball Katsuma", as part of his scheme. He did not plan on the rest of the gang tagging along.

They don't like to be over-fed, but most Katsumas like Katsuma Crunch, Green and Roarberry Cheesecake. They hate Sludge Fudge.

A "*" indicates that the line can be said regardless of the Katsuma's Happiness Points.

Retrieved from "https://moshimonsters.fandom.com/wiki/Katsumas?oldid=270761"
Community content is available under CC-BY-SA unless otherwise noted.