Moshi Monsters Wiki
Register
Don't have an account?
Sign In
Advertisement
in: Monsters, Katsumas, Articles for Cleanup,
and 3 more 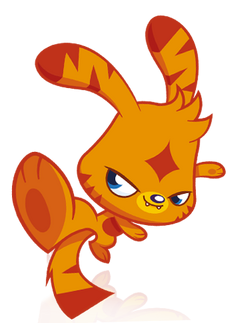 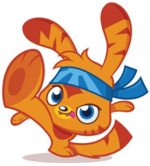 Katsuma is a monster in Moshi Monsters and the main monster of the Katsuma species. He has his own Nintendo 3DS game entitled Katsuma Unleashed in which the player plays as him. He also appears in Moshi Monsters: The Movie.

Katsuma is the well meaning but big-headed Moshi Monster obsessed with becoming a 'gooperstar'. A fan of martial arts, he is forever trying to perfect new kung fu moves but nearly always messes them up. In his quest to find the Great Moshling Egg Katsuma learns an important lesson: we're in this together!

In Moshi Monsters: The Movie, Katsuma is a self-centered, fame hungry, "gonna-be movie star" and protagonist of the movie, along with Poppet and Mr. Snoodle. He does not take delight in his friends tagging along after trying to cater his action fighting towards Roary Scrawl and stays rather irritable throughout the movie. He is rather clumsy and tends to fall over and fail when performing his "hi-ya hurricane".

A recurring plot is whistling and Katsuma's inability to do so. When Mrs. Snoodle hatches at the end of the movie and there is not much use for it anymore, Katsuma gains the ability to whistle.

Throughout the movie, Katsuma befriends a green Katsuma dancer in Jollywood who is shown to visit his house in Monstro City in the credit animation of the movie, where he serves her a drink.

Unlike most Katsumas he has stated to dislike dancing.

In Katsuma Unleashed, Katsuma has to save his friends from Dr. Strangeglove, saving Moshlings and defeating C.L.O.N.C. members along the way, releasing the power of Moshi Picchu. Katsuma can inherit his friends' abilities and use them to his advantage once he's saved them. In the game, Katsuma seems to keep the same traits as usual. (e.g.: When hit by an enemy, he gets annoyed quick. His language starts to get more aggressive.)

Katsuma is portrayed in a dojo training his signature move Four Claw Hi-Yaa Hurricane. Glumps begin to invade the dojo on demand of Dr. Strangeglove, but are no match for Katsuma.

Katsuma is having a good time on Ooh La Lane together with Diavlo and Poppet, but their laughter ceases as they spot Shoney approaching town. As soon as Shoney spots them and waves, they all flee. Unlike the other Monsters, Katsume deliberately tried to avoid Shoney by hiding in the cinema, looking around and sighing in relief to have avoided them...until Shoney comes to sit next to him. Katsuma's fearful body language shows him to know what is going to happen: The first mildly humoristic thing they see on screen causes Shoney to burst out in laughter and flames. Roasted and annoyed, Shoney offers Katsuma Pepper Popcorn while Katsuma remains in his deathly stare towards Shoney, as the food also bursts into flames.