Jinx the Magnificent Sphinx is a Super Moshling in the Toomies set in Moshi Monsters Egg Hunt. They are a sphinx. Jinx is exceptionally powerful and has a variety of abilities such as sandstorm summoning and firing wet sand.

Jinx is hatched from a Super Moshling egg which appears in the middle of the set in the zoo when the player completes a Moshling set (with all four original Moshlings). The Bumbletron 9000 Deluxe hatches the egg with the help of a golden spoon.

Gawp at a Magnificent Sphinx for too long and you might turn into a soggy sand sculpture. That’s because these mysterious Super Moshlings can fire wet sand from their noses. Phenomenally strong, they can also turn everything they touch to gold, summon sandstorms and dance whilst juggling several full size pyramids. 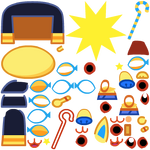 Retrieved from "https://moshimonsters.fandom.com/wiki/Jinx?oldid=272088"
Community content is available under CC-BY-SA unless otherwise noted.