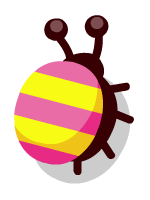 Hum Plum is minor character in Moshi Monsters who appears in the Moshling Garden.

Main
Hum Plum is an industrious insect. The little critter spends her days scurrying up and down the trees in the Moshling Garden, collecting invisible syrup for her hungry children. She stores some syrup for the Winter months, but most of it is fed to her demanding little brood. Busy Hum Plum rarely gets a day off, but you'll never hear her complaining.
All in a day's work
Hum Plum's litter is always hungry. They gobble down their goopendous invisible syrup dinner like there's no tomorrow, talking with their mouths full and making a monstrous invisible mess. Guess who has to clean it up? Poor Hum Plum of course.
Garden paradise
Stripy little Hum Plum loves her garden home. It's a beautiful and safe environment for her children to grow up in and she can chat with Cluekoo and Scarecrow whenever she likes.
Data File

Hum Plum works day in and day out, gathering invisible syrup for her children. Never a complain leaves her lips... even when her hungry brood speak with their mouths full, causing a terrible invisible mess!

Retrieved from "https://moshimonsters.fandom.com/wiki/Hum_Plum?oldid=253656"
Community content is available under CC-BY-SA unless otherwise noted.