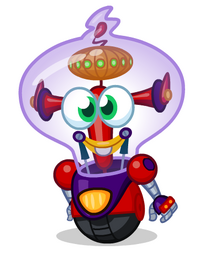 NO! Not a supa spanner! You need the DROOL DRILL!

Hubbs is the partner to Sprockett and former C.L.O.N.C. employee.

As partner, 'Sprockett & Hubbs' are hardly ever seen seperate. Unlike most robot characters, Sprockett and Hubbs have no master or creator they have to listen to.

Originally they worked for C.L.O.N.C., but were both fired after the Super Weapon failure and dumped in the jungle on Music Island.

He helped the Zoshlings rebuild their ship in Masters of the Swooniverse. Hubbs prematurely launched the Rhapsody 2 before the Super Moshis left the ship due to a misunderstanding over what Captain Squirk mentioned over the intercom.

Players can buy a Golden Hubbs in Horrods at a price of 1,000 Rox. Some users won it by building a Golden Sprockett in the Build a Robot competition.

Main
Hyperactive Hubbs, one half of the robotic inventor duo, Sprockett and Hubbs, is never happier than when he's designing gadgets, babbling about new contraptions, and skimming across the lab. It's a pity then that this bubble headed buffoon wastes more time squabbling with Sprockett than getting on with his work!
Monstrous machine
Sprockett and Hubbs created the Glump-o-Tron 3000. Dr. Strangeglove uses the terrifying machine to transform Moshlings into his evil Glump minions. Mwah-ha-ha!
Tasty business
Hubbs is a very fickle robot who can't decide whether he should work for C.L.O.N.C. or the Super Moshis. All it takes is the offer of an oil cocktail or a circuit board sandwich and the cog-headed inventor will work for anyone!
Data file
Often spotted: Whizzing along the floor of the C.L.O.N.C. laboratory.
Likes: Gadgets, irritating Sprockett
Notes

Accident-prone creators of some of C.L.O.N.C.'s most dastardly contraptions (including various Glumping machines), Sprockett and Hubbs are the untrustworthy robotic duo who can’t stop squabbling. In fact they can’t even agree on who to work for. Put it this way, if you oil their cogs they’ll do your jobs!

Hubbs is the hyperactive little bubblehead inventor who can’t stop babbling on about oil cocktails and circuitboard sandwiches whilst flitting around on his rollerball. Maybe he has a screw loose?

Further involvement with C.L.O.N.C. has been unclear but if Dr. Strangeglove can keep coming back to the organisation it is not out of reach that S&H industries would follow.

Hubbs likes to ridicule others, behind their backs and to their face, the latter especially to Sprockett in the hopes of receiving a creative insult. He constantly laughs and is supposedly very loud. 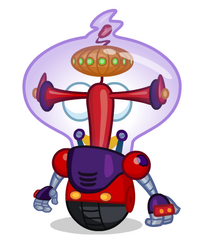 Hubbs is an average sized one-wheeled robot with a glass bulb protecting its face. Its face is a thin tube connecting the wire to his processor (brain), his circuit board wire (neck), his expanded hearing devices (ears) and provides space to display a face.

His eyes, as shown in his Mash Up card, appear to be organic. His mouth, featuring a bucktooth, is supported by two screws and has no other function than to imitate movement of a organic mouth in order to commune emotion and seem more "human-isque".

All the tiny details of Hubbs face make him seem to be of a more delicate design that Hubbs, who looks more sturdy. From the back and front, it seems Hubbs is supposed to commune something of wearing a hoodie. 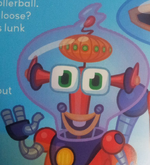 In the Official Annual 2014 and Moshipedia books, Hubbs is depicted with square eyes, supposedly being a predecessor of the eventual design with round eyes. It was most likely a mistake in which Mind Candy provided older flash files for book content.

Best friend and partner, one cannot spot the two separated. The two bicker a lot, Hubbs being the one mostly causing it with his teasing behaviour.

Referred to as "The Mighty Gloved One" by Hubbs, he is the only character to speak ridicule of Dr. Strangeglove. Strangeglove seems to lack respect for them as well as he was highly amused when they got kicked off the Scare Force One after the Super Weapon failed.Super Weapon Showdown! However, they were engineeringing colleagues and S&H Industries helped develop more Glumping Machines, of which the original Glump-o-Tron 3000 developed by Dr. Strangeglove -a design kept secret by C.L.O.N.C.- was shared with them. In Katsuma Unleashed Dr. Strangeglove had build an army of Robot Moshlings, Robotlings, using the original robot moshling design of the Robo Quacks which were developed by Sprockett and Hubbs.

Retrieved from "https://moshimonsters.fandom.com/wiki/Hubbs?oldid=283828"
Community content is available under CC-BY-SA unless otherwise noted.