Holga the Happy Snappy is an ultra-rare Moshling in the Techies set within the Moshi Monsters franchise. Holga is a digital camera that enjoys taking photos of everyone they meet and handing out prints of the photos to them. Holga can be malicious though; if they take a photo of something they deem exclusive or rare, they may sell it off and con the buyer for Rox.

Say cheese and strike a pose because Happy Snappies are Moshlings that just love taking photos, especially if there's a famous monster in town. Get the picture? You will, because they can't resist handing out snaps to everyone they meet. I've often used Happy Snappies to help me photograph elusive Moshlings on my expeditions - risky as they have been known to run off and sell their pictures to Roary Scrawl at The Daily Growl in exchange for a few Rox!

Say cheese and strike a pose because Happy Snappies are Moshlings that just love taking photos, especially if there's a famous monster in town. Get the picture? You will because they can't resist handing out snaps to everyone they meet.

Main
Happy Snappies are never happier than when they're handing out their own snaps to everybody in sight. Fancy a furry mugshot of yours truly, to hang on your living room wall? Then head on over to Shutter Island and strike a pose! Digital or film, monsterific colour or black and white, Holga and the other Happy Snappies do it all. Snap-tastic!
Techie tiddlywinks
When these chummy cameras aren't comparing their towering tripods or chasing after the gooperstars of Monstro City society, they like to focus on a quick-fire game on lens cap tiddlywinks. You've got to have a steady hand to launch a lense cap - one wobble and you're out!
Say "cheese!"
If there is a gooperstar in the City, then Holga won't be far behind, lens poised, zoom at the ready. These noisy little Techies will reel off a roll of film in a flash!
Data File
Moshling type: Techies
Species: Happy Snappy
Habitat: 35 Mill Hill, Shutter Island
Techie teammates: Wurley, Gabby, Nipper
Notes:

Happy Snappies love to take photos. SNAP! They particularly like shooting pictures of the rich and famous and using towering tripods to get a steady, perfect image. FLASH! And when they're done, they hand out the results for all to see.
Off duty, these camera-like critters can be found at 35 Mil Hill, somewhere on Shutter Island, where they unwind with a relaxing game of lens cap tiddlywinks. Happy Snappies don't like a lack of focus for long though, and they're soon back to the snapping.

Head to 35 Mil Hill, somewhere on Shutter Island, and you're sure to spot a few playing lens cap tiddlywinks.

Shaky hands and lack of focus. 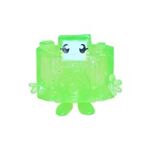