HipHop the Blaring Boombox is an Uncommon Moshling in the Tunies set. They are a boombox who loves sharing their music. Blaring Boomboxes lose their memory when their record button is pressed.

Say 'wassup' to Blaring Boomboxes the playful noisemakers who just can't stop rockin' to the bang beat boogie that blares from their speakers day and night. Obsessed with old-school tunes, they love sharing their music with other Moshlings. Just make sure you don't press 'record' as this causes them to lose their memory. Oops!

Say 'wassup' to Blaring Boomboxes the playful noisemakers who just can't stop rockin' to the bang beat boogie that blares from their speakers day and night. Obsessed with old-school tunes, they love sharing their music with other Moshlings - and that can be mighty annoying as Grandmaster Bash and his Furious Hive (Legendary Moshi Rapper with a beehive hairdo) is no longer popular in Monstro City. If you're feeling daring you can always reach for the 'stop' button (every Blaring Boombox has one on its head.) Just make sure you don't press 'record' as this causes them to lose their memory. Oops!

Main
Calling all disco divas! Come on down to TinnyTone Boulevard and Blaring Boomboxes. Noisy little critters like HipHop adore old-skool tunes and will wow you with their rockin' rhymes and the bangin' boogie-woogie beats that blast out of their tinny speakers. Pawsome!
Wipeout!
These dancing dudes will happily share all their tunes with you, day and night, until their batteries need recharging. That is, unless someone presses their record button. That will erase the Boomboxes' memories and they'll forget everything, even who they are!
Flashy friends
HipHop and fellow Blaring Boomboxes love to groove on down to the beat with the blinging Flashy Foxes in the Hipsta Hills.
Data File
Moshling type: Tunies
Species: Blaring Boombox
Habitat: TinnyTone Boulevard in the Hipsta Hills
Tunie teammates: Plinky, Wallop, Oompah
Notes

Say 'wassup' to Blaring Boomboxes, the playful noisemakers who just can't stop rockin' to the bang beat boogie that blares from their speakers day and night. Obsessed with old-school tunes, they love sharing their music with other Moshlings. Just make sure you don't press their 'record' button because it erases their memories. Oops!

These playful noisemakers boogie all day and all night to the music blaring out from their speakers. Blaring Boomboxes love to share their music with other Moshlings, whether they're interested in it or not! 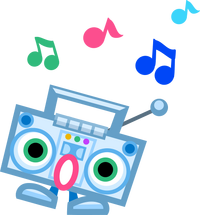 Get Down to these Funky Old-Skool Grooves!

HipHop is more or less a sidekick character to Blingo and is unable to read the situation where their music is wanted or not.

Blingo is a bit "playful" with HipHop as he tends to be with anyone he is close with. HipHop is part of Blingo's crew, often accompanies him and blares a part of Diggin Ya Lingo. Blingo imitates it as "pleh pleh pleh".
During the bit where they customize Blingo's newly bought car from Sly Chance, HipHop merely carries fuzzy dice as a tool and proceeds to not even hang them up as they are shown tied to HipHop's handle once they sit in the backseat.

HipHop is shown carried around by Blingo in Head Over Heels, who proceeds to head over to Zack Binspin's bin and uses HipHop as a bat against the bin. Zack Binspin is nothing more than a bit alarmed while HipHop is shown in the background having trouble to stand on their legs after the collision.

HipHop is designed after a Boombox, which is a portable music player and tape recorder introduced in the late 70s and is often associated with the 80s. It has a carrying handle, big buttons to eject a tape on top, a signal receiver (the pole with the ball) and the speakers function as eyes. HipHop runs on batteries.

HipHop's singing/speaking voice in Diggin Ya Lingo has been altered with a vocoder and is refered to as "The Cher Effect". It is more emotive and high pitch than "robot voices" tend to be done. When HipHop's mouth moves to produce his singing sound, it is displayed as soundwaves.

Retrieved from "https://moshimonsters.fandom.com/wiki/HipHop?oldid=286286"
Community content is available under CC-BY-SA unless otherwise noted.