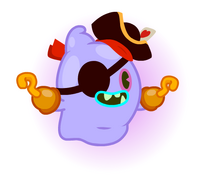 Tis a key I ate! But never mind about that!

The Curse of the Paw Wavin' Kitten

Handy Van Hookz is one of the Marooned Five, a group of Ghost Pirates.

He is a purple ghost who is hooked on two hooks. He wears a tiny pirate hat with a hearts card sticking out of it and an eyepatch.

Main
Washing the dishes in shark-infested seas is never a good idea – as Handy found out to his cost! Thankfully this merry ghost is too busy whizzing along the ship's rigging to worry about his missing mitts. Oh yes, he hates eating peas – aaarr, fiddly!
Handy hooks
Handy's hooks aren't so helpful when it comes to eating peas! But this cheerful old seadog doesn't mind his missing paws, because he's too busy using his hooks to swing across the Gooey Galleon 's rigging. Handy takes it all in his stride, though he's never quite sure what to do when Captain Codswallop shouts "All hands on deck"!
Into the sea
Luckily, Handy is a jolly sort of guy, because working for Codswallop is no laughing matter. Poor Handy is always having to walk the plank for not keeping the decks shipshape.
Data file
Job: Crew member of the Gooey Galleon
Pirate pals: Captain Codswallop, Jaunty Jack, McScruff, Mr Mushy Peas
Dislikes: Fiddly food, gloves
Notes

Doesn't leave the house without his: hooks. He got these after washing dishes in shark-invested seas. Thankfully he's too busy whizzing along the ship's rigging to worry about his missing mitts.

His NPC files are refer to him as "pirate hooky nokey". Rather than making his "no key" state the neutral one, separate file "pirate hooky" has the key in his body.

Retrieved from "https://moshimonsters.fandom.com/wiki/Handy_Van_Hookz?oldid=271502"
Community content is available under CC-BY-SA unless otherwise noted.