Super
Gumz the Scrubadub Shark is a Super Moshling in the Salties set in Moshi Monsters Egg Hunt. They are a shark who eats small boats. They have false teeth and hold a toothbrush.

Gumz is hatched from a Super Moshling egg which appears in the middle of the set in the zoo when the player completes a Moshling set (with all four original Moshlings). The Bumbletron 9000 Deluxe hatches the egg with the help of a golden spoon.

You’re going to need a bigger boat if you want to catch a Scrubadub Shark because these wild but wacky Super Moshlings eat little boats for breakfast. Thankfully, their false teeth always seem to pop out when they are trying to be ferocious. The safest idea is to approach one when it’s in the bath with its motorised Scrubadubba Brush.

Seals with Reels and yummy surfers. 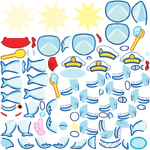 Gumz' sprite sheet
Add a photo to this gallery

Retrieved from "https://moshimonsters.fandom.com/wiki/Gumz?oldid=287931"
Community content is available under CC-BY-SA unless otherwise noted.