Goosebump Manor, sometimes also referred to as the "Haunted House", is a building in Moshi Monsters, situated on the right-hand side of the map. It can only be visited via the map, as there are no paths leading from locations to it. 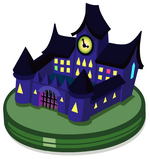 Goosebump Manor appears to be a Haunted Mansion, and was referred to as such in Spooktacular Spectacular in the invitation of Simon Growl. It has a slightly different design as the rooftops is pointier and active at night time.
It is home to Vincent Doorface, Zoinks and his nephew.
For some reason, Big Bad Bill and I.G.G.Y. were found in the basement, making the place seemingly accessible to all who would want to wander in.

There is a shop inside named Rare & Scare, run by Zoinks, where Halloween themed items are sold. As of Halloween 2013, due to the Moshis vs Ghosts event, the shop has become inaccessible. Before the existence of this shop, the building was inaccessible on the map and had no real significance, much like some of the areas to the east of Monstro City.

The fourth saga of the Moshis vs Ghosts event was located here. From house overview, the clock window seems to have smashed, whereas the clock itself is spinning uncontrollably. Inside, the place appears bigger like all the other "houses" you went into during this event. Looking for the source of where the Ghosts came from, you meet Jibbly. He points you towards the Ghost Portal, guarded by statues of Twaddle, which you attempt to close.

Retrieved from "https://moshimonsters.fandom.com/wiki/Goosebump_Manor?oldid=256905"
Community content is available under CC-BY-SA unless otherwise noted.