General Fuzuki the Warrior Wombat is an Ultra-Rare Moshling in the Ninjas set in Moshi Monsters. They are a wombat samurai warrior. Rumours say that they once guarded Rox. General Fuzuki's 'eyes' are in fact cake tins which allows Fuzuki to blink or sleep with the appearance of open eyes.

I heard a rumour that Warrior Wombats were once used to guard Rox and other precious things. But that's not because these furry little Moshlings are fearless. It's because legend has it they don't need any sleep. Or do they? My research shows that their 'open eyes' are actually titchy cake tins welded to their hats. This allows them to take forty winks on the sly. Napping on the job? Now that's naughty. Still, at least it helps me study the rare little sleepyheads. I just sneak up with my snore-o-meter and get busy.

Many moons ago, Warrior Wombats were used to guard the entrance to the Rox Caverns of Mount Silimanjaro. But that's not because these furry Moshlings are fearless. It's because they don't need any sleep. Or do they? New research shows that their open eyes are actually little cake tins welded to their funny hats. This allows them to take forty winks on the sly.

The Warrior Wombats have a proud tradition of guarding all sorts of intergalactic shiny stuff. Some think it's because they're fearless, but actually it's because they just don't fall asleep! Or at least that's what Moshlings experts used to think . . .
Researches observing the Warrior Wombats in their natural habitat of ChillyBot State Park have now realized that what they thought were the Moshlings's ever-open eyes are actually cake tins welded to their funny Ninja headgear! So they probably do sleep, but you won't know when. This may explain their love of comfy cushions and dislike of alarm clocks!

Main
According to legend, Warrior Wombats like General Fuzuki once guarded the caverns of Mount Sillimanjaro because it was believed that they never sleep. But now it's thought their apparent open eyes might just be cake tins that hide the fact that they're dozing on the job! So far no one has ever stayed awake long enough to find out for sure... zzzzzzz!
Ninja skills
General Fuzuki is a serious Ninja who spends time practicing his stealth moves. Poor old Chomper got the fright of her life when the hairy warrior managed to sneak up on her.
Land of the midnight sun
If you want to meet a Warrior Wombat, head to ChillyBot State Park. It's believed the napping Ninjas live in the freezing wastelands, where the sun never sets. Be sure to pack your shades, a comfy cushion, and some cake tins as gifts.
Data file
Moshling type: Ninjas
Species: Warrior Wombat
Habitat: ChillyBot State Park
Ninja pals: Sooki-Yaki, Chop Chop, Shelby
Side-notes

Warrior Wombats are thought to live in underground caves in the foothills of Mount Sillimanjaro.

Alarm clocks and bits of food in beards. 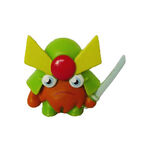 Moshi Karts figure
Add a photo to this gallery

General Fuzuki as they appear in Moshi Cupcakes

Retrieved from "https://moshimonsters.fandom.com/wiki/General_Fuzuki?oldid=267325"
Community content is available under CC-BY-SA unless otherwise noted.