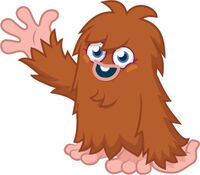 Furis are one of the six types of Monsters in Moshi Monsters. They can often be found splashing around in the Lush Lagoon, washing their massive stinky feet in the muddy water.

Furis are based off the sasquatch and move like gorillas.
The default Furi has the notable Moshi Monsters-style crescent pupil, fit with a piercing blue colour. Hair bedecks almost every segment of the body but the art style has varied in the fur coat being a dress as bald legs peer under it and the legs grow fur as well.

Furis are the biggest sized of adoptable monsters but peaceful and seemingly a bit down in the dumps. Sceptical the rest of the group, when Furi experiences negligence or mistreatment, it gives abstinence to anger and instead cries. There is never an oh-it's-your-fault manner, it is rather just a cry of missing the owner more than anything, but food is always close to the top of their list of longings.

Main
Harumph! Some say that Furis are the grouchiest, slouchiest hairballs in all of Monstro City and beyond. But look past the furry Furis shaggy mops and fur-rowns, because these loveable monsters are actually fangtastically friendly and just love to party and get down!
BFF (Best Furi Friend)
Waft some Chocolate Coated Broccoli or a steaming plate of Rat Tail Spaghetti under Furi's nose, and this huge hairball will be your friend for life! Furis like nothing better than a full-on feast washed down with lashings of wobble-ade. 'Urp!
Luscious locks
It's monstrously difficult keeping up with a grooming regime when you're as furry as Furi. It's even worse when Furis get their paws on some tasty chewing gum - try getting that out of their hairy mops!
Data File
Habitat: Monstro City
Catchphrases: "Haircut? What haircut?", "Let's be Fur-iends!"
Monster mates: Diavlo, Katsuma, Luvli, Poppet, Zommer
Notes

A "*" indicates that the line can be said regardless of the Furi's Happiness Points.

Retrieved from "https://moshimonsters.fandom.com/wiki/Furis?oldid=270759"
Community content is available under CC-BY-SA unless otherwise noted.