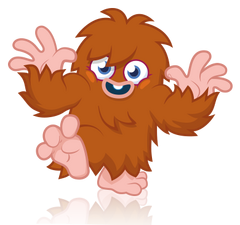 Furi is a character that appeared in Moshi Monsters: The Movie, playing one of the main protagonists, alongside Katsuma, Poppet, Zommer, Diavlo and Luvli. He was the fourth character to be caught by C.L.O.N.C. due to being the fourth most popular Monster. He dons the classic brown and pink colour scheme.

Whilst his large appearance might show otherwise, Furi is a friendly character who is sharp at replying in conversations. He loves to eat (which caused him to be sidetracked and  kerfuffle into the wrong place) and is very smart but portrays himself as dumb as his innovations and speech sometimes don't make sense. He likes to joke around with his friends. He also seems to be oblivious to some things, as he decided to cook casserole when he was trapped in Hoodoo stew, and decides to eat candy when Sweet Tooth chases after the group. Furi also shows care for his friends, showing a worried face when Poppet is concerned about Zommer. Overall, Furi is a chilled back, calm and friendly character who will help his friends when needed.

Furi also appeared in a Food Tube episode with Jamie Oliver. He claims that he is friends with Bushy Fandango and laughs when Jamie throws olive oil onto him. Furi again shows a positive, friendly attitude, and him and Jamie get along quite well.

Happy-go-lucky and constantly hungry, Furi is the dim but lovable Moshi Monster who is occasionally struck by genius (especially if food is involved). A lumbering lummox, Furi is often getting himself and others in trouble thanks to his huge appetite. Yum!

Add a photo to this gallery
Retrieved from "https://moshimonsters.fandom.com/wiki/Furi_(character)?oldid=267316"
Community content is available under CC-BY-SA unless otherwise noted.