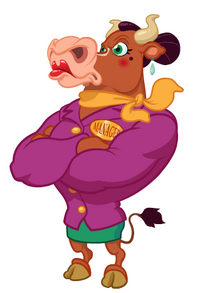 Main
This is a cow that you don't want to make moo-dy! Little is known about the fearsome Frau Now BrownKau. But one thing is for sure, though: the heinous heifer's C.L.O.N.C. pals are from the wrong side of the meadow where the grass is most definitely not greener!
Cosmic Kau
The Frau kidnapped Zoshling First Officer Ooze in order to drain his Cosmic Gloop. It's unclear exactly what the Frau and C.L.O.N.C. plan to do with all the Gloop, but it's best to keep out of the Frau's way - especially when she's wielding a ghastly Gloop gun!
Bovine brute
After a misspent youth grazing on grassy gobstoppers, the Frau left her hometown of StrudelHofen with monstrously rotten teeth to start her villainous career as the commandant of the Scary Dairy. A fearsome set of false teeth later, the Frau was ready to put her evil plans into action.
Data file
Location: Unknown
Job: Working for C.L.O.N.C.
Features: Red lipstick
Baddie buddies: Dr. Strangeglove, Sweet Tooth
Notes

Wanted in connection with gloop theft and Sandy Drain sabotage, Frau Now BrownKau is the menacing moo with friends in all the wrong places. Little is known about this former commandant of the Scary Dairy but rumour has it her "udderly" fearsome false teeth are a direct result of grazing on too many grassy gobstoppers back home in StrudelHofen when she was a calf.
Likes
Grass goolash and her vintage MooCow 4000 Milk Float.
Dislikes
Cattle grids and red rags.
Weakness
"This menacing moo hates to be without her fearsome false teeth."

She was the first newly introduced C.L.O.N.C. member of Season 2, where she features as the main antagonist in the second mission. You meet her in the lobby, after first encountering Simon Growl who claims to not know you, thus not granting you direct access to the hotel. However, if you find her teeth, she is okay with you staying. She later comes to the pool to announce the spa treatment. When you find a way to get into the room, you find Zack Binspin who's hair treatment turned out to be a contraption that caused his hair to grow excessively. You find her in another room where she "milked" First Officer Ooze out of Cosmic Gloop, using another machine. She uses a gloop gun to shoot at you and upon losing the battle, leaves beaming herself up like the other C.L.O.N.C. agents.

She appears as a cameo appearance on a photo in Big Chief Tiny Head's room. Upon interacted with, Super Moshi reads: "It's our little secret. Xoxo Frau".

In this Music Video, the Sandy Drain Hotel is shown to be open for anyone to enter. Frau seems to function as a bath superintendent. It is unclear if these are developments and/or if Frau is still with C.L.O.N.C.

Frau is first encountered in the lobby of the Sandy Drain Hotel. In order to conceal her later malefactor-like persona, she acts innocent and implores the player to find her teeth. When they oblige, they are granted a free stay at the hotel, courtesy of Frau. When all seems to be going well, BrownKau proclaims that there will be spa treatment. However, when the player finds themselves with access to Zack Binspin's room, he can be seen with hair of extensive length as a result of the treatment, which was actually a contraption that causes excessive hair growth. In another room, she can be found abusing First Officer Ooze for Cosmic Gloop, utilizing another machine. To stop you in your tracks, she will fire a gloop gun, but after failing to stop you, she goes into a state of anger, much alike other C.L.O.N.C. agents.

She was designed by artist Trevor White Frau is a chestnut red cow standing up on two cloven back hooves. Instead of front hooves, her large hands have three fingers on each. Her dark purple hair shows plum reflections, with her head hair gathered in a tight bun and her tail hair being a small, neat tuft. She has a light salmon coloured muzzle with large nostrils and a light grey spot in the middle of her face, reaching up to her two emerald green eyes.

She wears make-up, with a red blush on her cheeks, red lipstick, and purple eye shadow. On her ears are light blue earrings in the form of teardrops. She also has a beauty mark under her left eye. Frau's notable muscular build is covered by a long-sleeved purple coat with a golden badge that reads "MANAGER" on her chest. Above it, a mustard neckerchief is tied around her neck. Under her purple coat, she either wears a teal sheath dress or a teal pencil skirt. Her kneeling legs are tiny when compared to the rest of her body, which is towering and formidable.

She is depicted with uninterested and frowning facial expressions and furrowed eyebrows, with her eyes notably turning red when angered. She often shows what can be interpreted as closed-off body language, by crossing her arms while standing. She is also shown rolling her eyes and holding her head up high. When walking, she swings her arms with the motion like an athlete.

Retrieved from "https://moshimonsters.fandom.com/wiki/Frau_Now_BrownKau?oldid=270851"
Community content is available under CC-BY-SA unless otherwise noted.