You better keep an eye 'cos the fur will fly in Katsuma's chop-tastic debut music video! Watch in awe as the Moshi Monsters gooperstar makes moshified mincemeat of Dr Strangeglove and his marauding Glumps. And look out for special guest vocals from sushi chef to the stars, Benny Haha! Hi-yaa!

A parody of most Kung-Fu movies, it starts off in a dojo as the sun rises. It then shows Katsuma practicing martial arts on the pots in the room.

The video then consists of opening-credits/teaser-trailer styled introductions of the characters, which include:

It then shows a sillhuete of Katsuma doing martial arts.

Benny Haha seems to act as the mentor figure, Katsuma as a Jackie-Chan styled protagonist, Dr. Strangeglove as the antagonist, and the Glumps as his minions.

Benny Haha uses many non-sensical pieces of advice as a parody of the types of advice and proverbs given in classic Kung-Fu films.

You better keep an eye cos the fur will fly
When he's throwing shapes round the town
Katsuma! (Unleash your inner hurricane!) 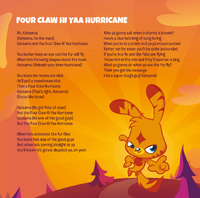 You know his moves are slick
He'll pull a roundhouse kick
Then a Four Claw Hurricane
Katsuma (That's right, Katsuma)
(Focuse like lotus)

When he's unleashed the fur flies
You know he's one of the good guys
And when he's comings straight at ya
You'll know he's gonna dispatch ya, oh yeah

Who ya gonna call when a storm's a brewin?
Here's a clue he's king of kung fu-ing
When you're in a pickle and ya plum surrounded
Better run for cover you'll be quite astounded
If you're in a fix and the fists are flying
Throw him in the mix and they'll soon be crying
What ya gonna do when ya see the fur fly?
Think you got the message
He's a super tough guy! Katsuma!

Retrieved from "https://moshimonsters.fandom.com/wiki/Four_Claw_Hi_Yaa_Hurricane?oldid=268298"
Community content is available under CC-BY-SA unless otherwise noted.