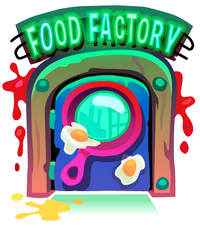 The Food Factory is a kitchen zone in your monster's house. It is where players can make food to feed their Moshlings and earn Moshling Stars for Moshling Star Rewards. It first appeared, under construction (thus inaccessible), on March 28th 2014. It is built by Buster Bumblechops and is modelled after his kitchen in Bumblechops Manor.

Upon release, it featured the Pizza Game and the Bongo Calada game. The Pizza Game is the main game of the factory and was promoted as such. The Bongo Colada game featured two alternative games on release, Head Butt and Butt Smash, with a third one intended to release. In June 2014, The Cupcake Hut was added not long before the Slopcorn game. 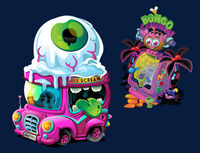 The default theme of your kitchen is described as "rustic". This means -and Concept Art had proven such - that other kitchen styles are available. They were never implemented in the game. If themes had function aside aesthetic is unclear. One would assume a stove, cupboard, chair and over would show at least some animation upon interaction, but such is not included. 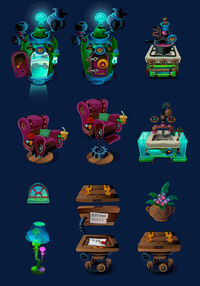 The Rustic style was conceptually called the "Inventor Theme"Zebitz portfolio or the Rustic and Inventor theme got mixed for the finalized product. Concept art shows the inclusion of a cabin of unknown function and a writing board displaying recipes.


Supposedly the Robo oven and stone oven also should have been part of the Inventor/Rustic theme but neither were put in the game. 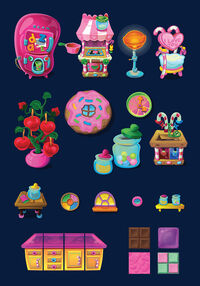 Clearly Candy themed, it did not make it to the game and was only shown in artwork. As such the descriptive list that follows will not represent its official names.

An error with Sprinkles