Super
Flash the Rowdy Rumbler is a Super Moshling in the Noisies set in Moshi Monsters Egg Hunt. They are a grey thunder cloud. They can start loud storms but can also show their rainbow capes after a storm.

Flash is hatched from a Super Moshling egg which appears in the middle of the set in the zoo when the player completes a Moshling set (with all four original Moshlings). The Bumbletron 9000 Deluxe hatches the egg with the help of a golden spoon.

Always ready to rumble, these awesomely loud Super Moshlings patrol the skies, keeping them safe from unidentified flying monsters. Rowdy Rumblers can kick up a real storm with their spectacular lightning bolts, but they also bring joy to the world of Moshi whenever they unfurl their rainbow capes after a downpour.

Turning things up to eleven and unicorns. 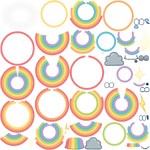 Retrieved from "https://moshimonsters.fandom.com/wiki/Flash?oldid=272040"
Community content is available under CC-BY-SA unless otherwise noted.