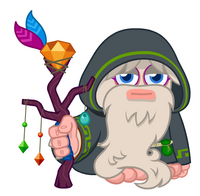 Elder Furi is a white Furi who is the leader of the Super Moshis, in Moshi Monsters. He used to be friends with Dr. Strangeglove.

Main
Elder Furi is the ultra-powerful leader of the Super Moshis. Old and very wise, he can often be heard chanting "ohmmm"! Great mystery surrounds his past. Some say that as a baby he tripped and fell into the Well of Wisdom, and the rest is history. Let's just say Elder Furi would pass any exam on any subject without even trying!
Mountain retreat
Elder Furi spent many years in a remote hut on Mount Sillimanjaro, before returning to the City to train the Super Moshis. No one knows what he did there, but it probably involved eating garlic marshmallows and learning new languages like Furlish and Poppetonian.
Super Moshiversity
This clever monster studied Superness at the Super Moshiversity. Back then he was known as Younger Furi and his best friend was Lavender Troggs - who later became the evil Dr Strangeglove!
Data file
Hangouts: Super Moshi HQ and his hut on Mount Sillimanjaro
Catchphrase: "Respect your elders."
Enemies: Dr Strangeglove and the rest of C.L.O.N.C
Notes:

Elder Furi
If it's guidance you seek, look no further because Elder Furi is the all-seeing, all-knowing leader of the Super Moshis. He might seem a bit old and crusty, but this ultra-powerful monster knows everything there is to know about... well, everything. How? Rumour has it he tumbled into the mythical Well of Wisdom as a baby and emerged chanting 'Ohmmmmm!' through his flowing beard.
Younger Furi
Younger Furi was the best friend of one Lavender Troggs while the two of them were studying at Super Moshiversity. He eventually grew up to become Elder Furi.

Elder Furi wears a grey hoodie featuring teal-tinted patterns. In addition to this, he has a beard virtually as long as his entire body and is most commonly seen possessing a mystic staff holding several multicoloured pieces of gems, fittingly known as Rox. Once described to have had a passionate relationship with Dr. Strangeglove (alias his name Lavender Troggs), Elder Furi once had a seemingly close bond with his now arch-rival. His other close relationships hold many major figures in Moshi Monsters itself, such as the Super Moshis.

He currently resides in Monstro City.

Elder Furi and Dr. Strangeglove graduating from the Super Moshiversity.

The location, Mt. Sillimanjaro, where his home is.

A younger Elder Furi is shown at the back
Retrieved from "https://moshimonsters.fandom.com/wiki/Elder_Furi?oldid=283959"
Community content is available under CC-BY-SA unless otherwise noted.