Dr. C. Fingz is a "Moshling" in the Zoshlings set within the Moshi Monsters franchise. Dr. C. Fingz is the Rhapsody 2's medical officer. He is an alien from the musical Planet Symphonia and one of the main characters of Season 2 of the Super Moshi Missions.

He is known to have telepathic powers as he has the ability to read minds. Dr. C. Fingz had amnesia after the ship crashed, and was captured to perform at the Cirque Du BonBon. He also helps you track Splutnik in the Season 2 Mission 6, Welcome to Jollywood.

In Cirque de BonBon, he uses his powers to read how many Moshlings you have.

Able to read minds via his telepathic wiggle-stalk, Dr. C. Fingz is the Rhapsody 2's chief medical officer. I could have done with his help that time I was smacked in the gooberries by a Valiant Viking's rubber hammer. Ouch! When he's not bandaging up battered Zoshlings, this fuzzy fella uses his powers to communicate with alien beings across the swooniverse. The good doctor can even temporarily extract talent from other critters, so one minute he can move like Bobbi SingSong, the next he can sing like Zack Binspin. I do hope he never meets Strangeglove - the results could be disastrous!

Dr. C. Fingz is the Rhapsody 2's chief medical officer. When he's not bandaging up battered Zoshlings, this fuzzy fella uses his telepathic wiggle-stalk to read minds. He can even temporarily extract talent from other critters, making him a mean entertainer.

Main
Dr C. Fingz is outta this world! No, really, he is... He's a Zoshling who works on the Rhapsody 2 as Chief Medical Officer. Always ready with bandages to patch up fellow Zoshlings, the Doc can also read minds. What's more, fluffy Fingz can temporarily extract talent from other critters, allowing him to dance or sing like a gooperstar!
Doctor who?
You probably haven't met the good Doctor yet as he's usually on a space mission somewhere in the swooniverse. But however far he travels, this fuzzy fellow can communicate with aliens anywhere - thanks to the wiggly-stalk-thing on top of his head, which gives him telepathic powers.
And for my next trick...
Poor Dr C. Fingz was captured by the sugary villain Sweet Tooth. "The Great Zoshlings" was forced to perform his mind-reading tricks at the candy criminal's Cirque du Bonbon.
Data File
Habitat: Swooniverse
Job: Chief Medical Officer of the Rhapsody 2
Zoshling crew: Captain Squirk, First Officer Ooze, Splutnik
Notes

The planet Symphonia but Dr. C. Fingz has also made guest appearances at the circus on Music Island.

From the Planet Symphonia. 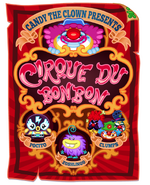 Season 2: Mission 1: A Close Encounter of the Zoshi Kind

His upcoming appearance is foreshadowed when Captain Squirk talks to the player near the end of the mission, as you can see his silhouette on the ship's computer.

The player is send out to investigate the Cirque Du BonBon's state of affairs, as Captain Squirk discovered a picture of his medical officer on a circus poster.
As the player finds out, Dr. C. Fingz has taken on the identity of the Grand Circus Gig Zoshlingo. It is unclear if this was caused by Sweet Tooth's hypnotism or if he attempted to build a persona after suffering from crash-induced amnesia. Zoshlingo seems cheerfully unaware of both his past and his act being part of Sweet Tooth's plan to find and steal Moshlings. He tries to impress you instead with his "awesome power" during his act, which consists of reading the minds of spectators to find out how many Moshlings they have.
Candy The Clown curbs the player's chance to tell Zoshlingo the truth for a good reason - after Candy is unmasked, Dr. C. Fingz seems to remember.

Dr. C. Fingz plays a prominent role in this mission by helping track down his crew member Splutnik in Jollywood with his psychic ability. He acts as a guide to Super Moshi by giving hints and showing where to investigate.
Upon waking up Splutnik, Dr. C. Fingz remarks it is good to see him. They both accompany the player to the mountaintop temple, where Fingz is shown panicking and covering his eyes when everyone is caught in Big Chief Tiny Head's trap. They both return together with the player to the Rhapsody 2 afterwards.

Season 2: Mission 7: Masters of the Swooniverse

During the exploration of the Rhapsody 2, Dr. C. Fingz's Sick Bay is left out, so he is noticeably mostly absent in a mission otherwise heavily featuring the Zoshlings as characters.

Season 2: Mission 9: Missing On A Star

Like the others, he was captured by C.L.O.N.C. and was offered as a price in the game show Squeal of Fortune, with the player's task being to perform in the show and win him and the others back.

His powers come in handy when he detects the correct location of the control room for the Doom Ray. He teams up with Splutnik when the group splits to find a key, but is left behind when stuck in Sweet Tooth's sticky candy.
He reminds the other Zoshlings of their combined dangerous power Cosmic Harmony, which they use on the risky chance that it may destroy the Doom Ray.

Dr. C. Fingz is a purple fluffy round character with a giant big-lipped or beaked yellow mouth with a pair of equally big front teeth. The black dot eyes have a little glimmer in them. On the top of its head protrudes a "wigglestalk"; a turqoise curl from which mind reading rays are send. While not magic, it is comparable with the stalk of Luvlis. Fingz's limbs are the same colour as the stalk.

Retrieved from "https://moshimonsters.fandom.com/wiki/Dr._C._Fingz?oldid=269410"
Community content is available under CC-BY-SA unless otherwise noted.