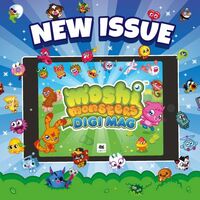 The Digi Mag is the now discontinued digital version of the Moshi Monsters Magazine. The magazines could be bought on Apple products running on iOS software. It was also possible to subscribe to the Digi Mag; doing this would get you Weegul. Digi Mags do not give you unique codes for items, but sometimes, a hidden code that everyone can use was found.

The Digi Mag was available worldwide, meaning that everyone outside of the UK who had an Apple product could view and read the magazines.

In 2014, the app was taken from the App Store, after not having any updates in issues for three months. No word has been spoken about the deletion of the app, but the paper version has also stopped promoting it.

Add a photo to this gallery
Retrieved from "https://moshimonsters.fandom.com/wiki/Digi_Mag?oldid=217838"
Community content is available under CC-BY-SA unless otherwise noted.