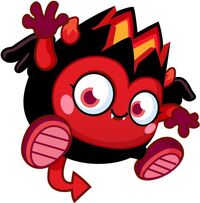 Diavlos are one of the six types of Monsters to adopt in Moshi Monsters.  Diavlo is the perfect pet for a fiery owner- hot, bubbly and always wanting some affection.

Diavlos have strong personalities and are very proud and cheerful. They like to shop and are very fond of their owners as well. When the owner tickles them a lot they start to roll on the floor, laughing and giggling. After a while they get annoyed and start to resist. They are one of the two monsters to float, the other ones are Luvlis. Whenever they level up, they do a special dance, which is the moonwalk. Diavlos jump and hop sometimes when they level up but they mostly moonwalk on the floor.

If the owner annoys a Diavlo a bit he turns to his side and shoves his arms out and makes a grunting noise. Some times they disappear from the screen when they get really annoyed, they tell their owner to go away and that they  don't like them any more. If the owner fed him a Scummi Bear back in early 2011, he would spit it out also stick his tongue out and go Arrrrghhh!

Main
Fzzzzz! Diavlo is one smokin' Moshi Monster. You Definitely don't want to get on the wrong side of these fiery little critters as they have very short tempers. They may be char-vellous fun and cheeky when they're happy, but bug these little devils at your own peril and wait for a monstrous eruption!
Hotheaded!
It's not hard to see why these little monster lose their tempers so easily. If your head was filled with sizzling lava like Diavlo's, then you'd also never be sure when you were about to boil over in a fiery explosion.
Diavlo vs. Katsuma
Diavlos need an outlet for all their explosive energy. A game of football with a karate-kicking Katsuma is just the ticket. Let's just hope there's no fouling, or things might really kick off!
Data File
Habitat: Monstro City (and anywhere in the Moshi world)
Catchphrases: "Sizzly-Fizzly!", "Smokin'!", "Fzzzztt!", "Char-vellous!"
Monter mates: Furi, Katsuma, Luvli, Poppet, Zommer
Notes

Diavlo is named after Diablo, meaning devil in Spanish. They are miniature active volcanos.

A "*" indicates that the line can be said regardless of the Diavlo's Happiness Points.

Retrieved from "https://moshimonsters.fandom.com/wiki/Diavlos?oldid=270820"
Community content is available under CC-BY-SA unless otherwise noted.