Darwin the Dithering Dodo is a rare Moshling in Moshi Monsters. Darwin is a dodo. It is implied that this moshling species are endangered as they are described as rare and frequently damage themselves from flight attempts.

Darwin did not see a release inside of the original online game. They instead made their obtainable debut in Moshi Monsters Egg Hunt where they can be obtained by daily egg hatching.

It’s hardly surprising Dithering Dodos are so rare because they can’t decide if they are coming or going. In fact these incredibly indecisive Moshlings can’t even decide if they can fly, and can often be seen dithering around towering ice ledges preparing to jump... before changing their minds. Again!

Take a hike to the Frostipop Glacier and you’ll probably find a flock of Dithering Dodos walking around in circles, trying to decide what to do.

Sailors and the smell of stuffing.

Darwin's collector card
Add a photo to this gallery 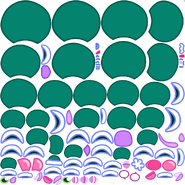 Textures
Add a photo to this gallery

Retrieved from "https://moshimonsters.fandom.com/wiki/Darwin?oldid=281268"
Community content is available under CC-BY-SA unless otherwise noted.