Clump the Lunk with a Trunk is a common Moshling in the Yeehaws set in Moshi Monster. Clump is a lumberjack bear. They dislike getting splinters from the wood.

Clump did not see a release inside of the original online game. They instead made their obtainable debut in Moshi Monsters Egg Hunt where they can be obtained by daily egg hatching. 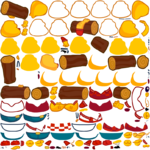 Clump's sprite sheet
Add a photo to this gallery

Retrieved from "https://moshimonsters.fandom.com/wiki/Clump?oldid=272018"
Community content is available under CC-BY-SA unless otherwise noted.