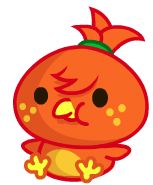 Cluekoo (also known as the Cluekoo) is a minor character in the Moshling Garden in Moshi Monsters. A tireless looker at how Moshlings would react with certain seeds, they provided many hints - in a way as to not entirely conceal the experimental nature of the Moshling Garden's functionality - in the field of Moshling encapturement.

With the mainstream update of Moshi Monsters in July 2013, Cluekoo's job was rendered rather redundant, what with the "seed combinations list", as it is dubbed, having surfaced. While such in-game functionality is no longer intact, Cluekoo's main job is still alive in fiction, such as in the Character Encyclopedia, for one.

Cluekoo first debuted alongside the release of Moshlings on September 8th, 2008.[1]

Functionally, Cluekoo was rather invariable and timeless. At first, before the dawn of seed combinations becoming widespread over the internet, Cluekoo was a go-to source for capturing Moshlings; there was little ground on how to catch even the most common Moshlings at the time. In spite of such, Cluekoo was a very controversial figure in the midst of the community - while some players found the clues helpful, many would find the clues rather transparent or slightly cryptic, or unfair, in the sense that the player could constantly plant the same seed they recommended without success.[2]

While Cluekoo's controversy was a big issue, they remained a pivotal part of the Moshling Garden until mid-July 2013 (exact date unknown), when Cluekoo's clues were completely scrapped and wiped from the game, making Cluekoo completely silent. While Cluekoo was made speechless purely to make way for the in-game seed combinations, players would simply say "Cluekoo" lost their voice - and, as it would emerge, even the developers, as shown by an email sent by Mind Candy themselves:

While such email promised a parsing of such issue, no such fix was ever included. However, the above email confirms that Cluekoo's speechlessness was not a result of fiction or the like, but rather just a technical issue - and as such, Cluekoo should still be treated as the observant they always were.

Main
Nothing gets past the beady eyes of the Cluekoo. Some monsters might say that the Cluekoo has a bit of a nosey beak, but if they want to catch those cute little Moshlings, then they're going to need all the help they can get! With outstanding observation skills, the orange-feathered Cluekoo is the birdie for the job!
How does your garden grow?
The Cluekoo perches in a tree, watching which flowers the Moshlings like to nibble. All a monster needs to do is work out the Cluekoo's clever clues and plant the perfect seed combinations to attract new pets. Moshling-tastic!
Loyal lookout
Moshling-catching is a full-time job - just ask Buster Bumblechops! But busy monsters can't spend all day waiting in their gardens. The Cluekoo is every monster's BFF (Best Birdie Friend), keeping watch for any Moshling activity, while the monsters are free to play, shop and set out on Super Moshi missions!
Data file

Even green-thumbed monsters need a little help sometimes, so thankfully there's the Cluekoo who lives in your Moshling Garden. The Cluekoo watches everything that goes on when you're not there and will tell you if any little Moshlings have stopped by for a nibble.

Even green-thumbed Monsters need a little help sometimes, so thankfully there's the Cluekoo who lives in your Moshling Garden. The Cluekoo watches everything that goes on when you're not there and will tell you if any little Moshlings have been by for a nibble.


While their relationship is not particularly elaborate, the pair are noted to chat.Hum Plum's CE bio Hum Plum is always beside Cluekoo, as the two are both settled on the same tree.


Scarecrow could be noted as a colleague of Cluekoo's; their job was to keep hungry Moshlings away from the flowers in the Moshling Garden, while Cluekoo would note what had visited to the player. Much like Hum Plum, the two always retained a close proximity.

Cluekoo is an orange cuckoo bird, hence their name. With small beady eyes and an over-sized head (though such should be considered as part of Moshi Monsters's distinct art style), Cluekoo has a small, plump body, which is always perched upon the tree to the far right of the Moshling Garden, as well as what appears to be a green hair bobble, which encircles a small patch of hair that soldiers upward. 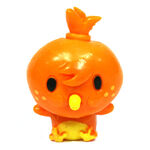 Retrieved from "https://moshimonsters.fandom.com/wiki/Cluekoo?oldid=253657"
Community content is available under CC-BY-SA unless otherwise noted.