Seal with a Reel

Cleetus the Seal with a Reel is a common Moshling in Moshi Monsters. Cleetus is a purple walrus wearing fishing attire. They are afraid of water.

Cleetus did not see a release inside of the original online game. They instead made their obtainable debut in Moshi Monsters Egg Hunt where they can be obtained by daily egg hatching.

If you're looking for a Seal with a Reel don't bother heading to Potion Ocean, or even Croak Creek, because these fishing-crazy Moshlings are afraid of water. I spent ages sailing the Seventy Seas in search of just one of these slippery fellas and where do you think I eventually found one? Yep, you guessed it, in a fishing tackle shop near Stinky Hollow. So what's with the reel? Well, Seals with Reels just love hooking rusty hubcaps onto their fishing lines and pretending they are flying saucers.

Believe it or not, Seals with a Reel are afraid of water; so don't go trying to find them in any Moshi watery location, because they won't be there! Their fishing reels aren't for fish, their reels are for collecting rusty hubcaps with and pretending that they are flying saucers.

If you're looking for a Seal with a Reel don't bother heading to Potion Ocean, or even Croak Creek because these crazy Moshlings are afraid of water!

You will usually find a few Seals with Reels barking on the rocks of the dried-up riverbed running through Whoop 'n' Holler Valley.

Fishy tastes, but only so far as fish paste and conspiracy theories. 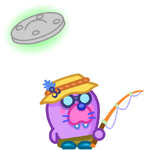 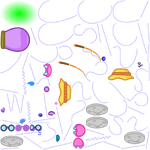 Cleetus' sprite sheet
Add a photo to this gallery 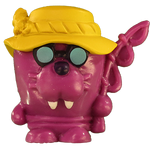 Retrieved from "https://moshimonsters.fandom.com/wiki/Cleetus?oldid=283916"
Community content is available under CC-BY-SA unless otherwise noted.