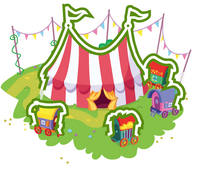 As of 4/10/12, it is the Cirque Du Moshi, which replaced the Cirque Du BonBon as Candy the Clown is long gone. The acts involved in the circus were Pocito, Zoshlingo and the Clumps.

The Circus in the bottom right-hand corner.

Retrieved from "https://moshimonsters.fandom.com/wiki/Cirque_Du_Moshi?oldid=282205"
Community content is available under CC-BY-SA unless otherwise noted.