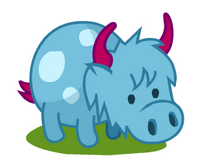 Chomper is a minor character in Moshi Monsters. He is one of the blue cows on Sludge Street, alongside Stomper. Clicking on the two cows 50 times will earn you the badge "Milk Shake".

Main article: Character Encyclopedia
Note: This is also shared by Stomper. There is also a huge error in this entry, since Chomper is referred to as Little Stomper, whereas Stomper himself Chomper. Thus, it should be Little Chomper, not Little Stomper.

Main
This chomping pair is often spotted grazing on patches of grass around Monstro City. Chomper and Stomper roam far and wide over the fields and parks, munching their way through hundreds of tonnes of grass each day. The City is proud of its turf-trimming team because they keep on mowing the grass until ... well, until the cows come home!
Home sweet home
At the end of each day, these MOO-pendous munchers retire to their cosy barn on Sludge Street, to rest their aching jaws and throbbing hooves.
Super-grazers!
Chomper and Stomper used to graze exclusively for a local farmer. When monsters began to get lost in the overgrown grass all over the City, the farmer gave this dynamic duo their freedom, realising that their powerful chewing skills and monstrous appetites could solve the problem.
Data file
Location: Meadows, parks and fields
Job: Moving the grass
Likes: Grass, of course!
Dislikes: Dairy products.
Notes

Chomper is often spotted grazing on patches of grass around Monstro City. Chomper roams far and wide over the fields and parks, munching his way through hundreds of tons of grass each day. 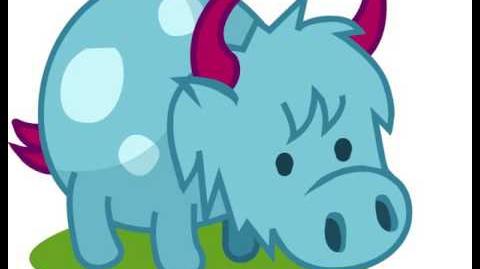 Chomper.mp4
In-game .gif, no audio provided
Add a photo to this gallery
Retrieved from "https://moshimonsters.fandom.com/wiki/Chomper?oldid=257531"
Community content is available under CC-BY-SA unless otherwise noted.