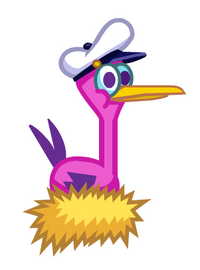 Chick Checker the Noisy Bird is a minor character in Moshi Monsters and Gift Island Roarker, whose duty is to predict weather changes.

He has a long beak to help him whistle loud tunes and also wears the official Gift Island worker's hat to blend in.

He sits on top of the Gift Island Postcard shop on top of a chimney, keeping his nest is warm and toasty.

Main
Gift Island never sleeps, which is just as well because the noisy Chick Checker has moved in. Here, among the clatter and clamour of machinery, Chick Checker has finally found a home he can call his own. Now, he can peep away, to his heart's content and predict the weather as loudly as he likes, since no one can hear him!
Wish you were here
Chick Checker set up home at the very top of the Gift Island Postcard Shop's chimney. His nest is always toasty warm.
Home, noisy home!
The cheeping Chick Checker used to live in Monstro City and loved peeping all day and all night. However, the sleep-deprived monsters of the town soon protested about the non-stop noise. After they put their paw prints on a petition and sent it to the MNP (Monster Noise Pollution) office, Chick Checker knew it was time to pack up his nest and weather charts and migrate to a place that was noisier than he was.
Data file
Location: Gift Island
Job: Predicting weather changes
Likes: Whistling, catching worms
Notes

Chick Checker's noisy peeps kept the whole of Monstro City awake, but with the clang and clamour of Gift Island, he found a home that none would complain about. He's famous for predicting weather changes and catching worms.

Add a photo to this gallery
Retrieved from "https://moshimonsters.fandom.com/wiki/Chick_Checker?oldid=248375"
Community content is available under CC-BY-SA unless otherwise noted.