Cherry Bomb the Baby Boomer is a rare Moshling in the Noisies set in Moshi Monsters. They are a red bomb who rarely explodes. Their fuses only crackle when they feel excited.

Quick! Stick your fingers in your ears, the Baby Boomers are here. But don't panic, these clockwork Moshlings rarely go boom. The reason they're so noisy is because their fuses fizz and crackle whenever they're excited. Fzzzttt!

Stick your fingers in your ears, the Baby Boomers are here. But don't panic, these clockwork Moshlings rarely go boom. The reason they're so noisy is because their fuses fizz and crackle whenever they're excited. I found this out the hard way when I was exploring the Candy Cane Caves and tried to entice a Baby Boomer out from its hidey-hole with a bowl of kaboomalot custard. Big mistake because it got so excited its fizzly fuse sparked an explosion. My eyebrows have never been the same. Fzzzttt!

Main
BOOM! If you don't like loud noises, then Baby Boomers like Cherry Bomb are probably not the Moshlings for you. These sparky, spherical critters are easily excited and when that happens, the crackle and fizzle of their fuses is loud enough to blow the wax out of any monster's hairy ears!
Fizz, bang, pop!
Cherry Bomb and the other Baby Boomers snap and crackle all over the City. Any Moshi who doesn't want these sizzling Noisies fizzing in their face should be ready with a cooling bucket of water. They should also avoid cooking goopendous nosh like bangers with dynamite sauce--one sniff and Baby Boomers will be banging down their door!
Bubbling over
Kaboom Canyon, where Baby Boomers love to hang out together, echoes with their laughter and booming voices. These Moshlings are so bubbly, it's hard not to get caught up in their excitement.
Data file
Moshling type: Noisies
Species: Baby Boomer
Habitat: Kaboom Canyon
Noisie pals: Boomer, Judder, Betty
Side-notes

Quick! Stick your fingers in your ears, the Baby Boomers are here. But don't panic, these clockwork Moshlings rarely go boom. The reason they're so noisy is because their fuses fizz and crackle whenever they're excited. Fzzzttt!

Not surprisingly, a Baby Boomer's food is bangers and crash with dynamite sauce. They chow down on this in Kaboom Canyon, but can pop up anywhere, with their fuses fizzing away.
There's no cause for panic though. They might be noisy but they don't explode very often! All that din is just their fuses fizzing and crackling when they get excited. 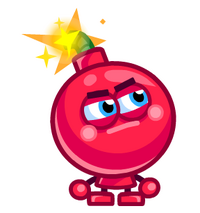 As Super Moshi is in their Gloopy disguise, dressed as a (rather large) Glump, Cherry Bomb naturally assumes them to be with C.L.O.N.C.. Just after succesfully convincing Mustachio that Super Moshi is with C.L.O.N.C., Cherry Bomb needs convincing that Super Moshi/Glump is with the Super Moshis. Cherry Bomb knows where the Super Moshi HQ is located, knows the current main threat of Dr. Strangeglove, knows Sweet Tooth is poisoning the candy, that they hypnotized the Roarkers, that the goo contains the poisoning, how to distract the glumps and where Sweet Tooth's lair is found deep within the caves. Cherry Bomb has access to a small tunnel structure in which they can hide and lets them travel from place to place, faster than Super Moshi. Supposedly Cherry Bomb observed the happenings and waited for help to arrive or planned to get help but feared for their own safety.

Pocito is very fond of Cherry Bomb. In Big Top Ballyhoo, Pocito requests to have on of those Cherry Bomb Plushies from the Fun Fair Shop in return of granting Super Moshi access to the big tent.

In Music Island Missions: C.L.O.N.C. Strikes Back, Pocito demands a total of six plushies, one per Super Moshi. He eventually only gets five of them, but not point is made of that. Attempting to give more than one plushy to Pocito in the Mission, as you can win unlimited, will lead him to state one is plenty. One of the Plushies at the Fun Fair is the real Cherry Bomb sitting between them. Pulling them out will make ask Super Moshi ask what they are doing there. There is no response or interaction with Cherry Bomb and they remain standing in front of the shop. You later need them to be the fuse and fuel for the cannon Pocito suggested to use to launch himself into Candy the Clown.

In the Twistmas artwork of the advent Calander, Cherry Bomb attempts to make out with a red glittery bauble. Their Twistmas figure is their face being a green striped bauble with a hanger instead of a fuse.

Pocito voiced to like Cherry Bomb because they are powerfully explosive but only did so towards Super Moshi to explain why he would want a plush toy in Cherry Bomb's depiction. While Pocito, Burnie and the real Cherry Bomb wait in front of the tent, the two are not shown to interact.

Cherry Bomb is a cherry red object-head with a metalic body supporting the head. Upon exploding, only their eyes and body remain but their head quickly reforms. They have thick expressive eyebrowsand small round blush stickers on their cheeks.

In animation they are shown to have somewhat of a tick and do not close their two eyes are the same time. They sneakily look around before checking their fuse not going off. Cherry Bomb's animation shows pink flowers upon exploding. These flowers are likely supposed to depict cherry blossoms creating a visual pun.

Retrieved from "https://moshimonsters.fandom.com/wiki/Cherry_Bomb?oldid=285010"
Community content is available under CC-BY-SA unless otherwise noted.