Captain Squirk, or Capt. Squirk, is an ultra-rare "Moshling" in the Zoshlings set within the Moshi Monsters franchise. Squirk leads their group on a mission to explore the galaxy to find new worlds and melodies.

Captain Squirk's debut was in the first Super Moshi mission in season 2, where they had crashed due to the Rhapsody 2 (ship of the Zoshlings) crashing as C.L.O.N.C.'s fist of doom backfired. From then on out the player helps Squirk and Squirk acts as a "mentor" alike Elder Furi in the first season's missions.

As captain of the Rhapsody 2, Squirk's main objective is to explore monstery new worlds, seek out quirky new melodies and boldly go where no Zoshling has gone before. He can also play any tune in the swooniverse on the spoons.

I'm a Moshlingologist, not a Zoshlingologist, so all I can do is explain what Tamara Tesla told me about this strange little chap. As brave captain of the Rhapsody 2, Squirk's mission is to explore new worlds, seek out quirky new melodies and boldly go where no Zoshling has gone before. But there's more to Captain Squirk than whooshing around the stars. This multi-talented alien can play any tune in the swooniverse on spoons! Where he learnt how to do that is a mystery, but I've already booked him for this year's Moshi Fest.

Habitat
The planet Symphonia but Squirk can often be found traversing the Swooniverse aboard the Rhapsody 2.
Personality
Heroic, bold, trailblazing.
Likes
Planet-hopping and squirmholes.
Dislikes
Violin bows and turbulence.

Main
Captain Squirk is a Zoshling who lives on the planet Symphonia; a strange, outta-this-world place. Squirk is Captain of a group of Zoshlings who were sent out into the swooniverse in their spaceship on a daring mission to investigate an odd red star that has been spotted in the sky.
Mission impossible
The evil antics of the sinister C.L.O.N.C. organisation caused the Zoshling spaceship Rhapsody 2 to crash-land on Music Island. Captain Squirk had to seek Super Moshi help to locate the missing crew.
To boldly play...
Squirk is not only an intrepid intergalactic explorer, but also one of the top musicians in the entire swooniverse. The talented Zoshling is often found playing the spoons at the Symphonia Proms.
Data File
Habitat: Swooniverse
Job: Captain of the Rhapsody 2
Zoshling Crew: First Officer Ooze, Splutnik, Dr C. Fingz
Side notes

As heroic captain of the Rhapsody 2, Squirk's primary objective is to explore monstery new worlds, seek out quirky new melodies and boldly go where no Zoshling has gone before. There's more to Captain Squirk than whooshing around the stars - this multi-talented alien can play any tune in the Swooniverse on the spoons.

The Rhapsody 2' heroic captain is a Zoshling with a mission. Captain Squirk roams the Swooniverse exploring new worlds, seeking out quirky new melodies and voyaging where no Zoshling has ever voyaged before. As well as being a first-rate leader, the alien is also out of this world at playing marvelous melodies on the spoons. 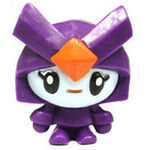 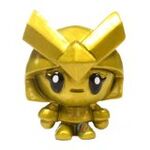 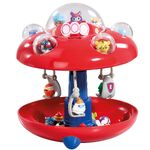 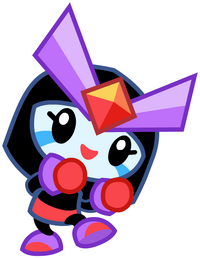 Symphonia is light years away and our dinner's getting cold!

Captain of the Rhapsody 2

A Close Encounter of the Zoshi Kind

Blast off Masters of the Swooniverse

The captain tends to speak highly of others and addresses them with their full title, even going as far as granting titles to those he feels lack them. Respect, perhaps affection, and a need to make everything seem more grand and clear in his perception motives him to do so. Squirk is one to quickly jump to conclusions and is thus a bit chaotic but remains calm and collected when the situation is dire and needs to lead his officers.

He wears something similar to kabuki painting and his helmet seems to be of a same design as General Fuzuki's.The helmet is a headdress, worn by Zoshling captains. The emblem on the headdress is made from Goop-tonite.  The game "Magic Hero Squirk VS Gamappa" makes the connection to Japanese culture more apparent because the genre of big creatures in cities, such as Godzilla, are popular themes for Japanese super heroes, Sentai, which Squirk bares a resemblance to.

He is the leader of the Zoshling crew and functions as a mission "guide" through Season 2.

Within the course of appearances in the stories and comics, Captain Squirk has been written with a varying personality from heroic and helpful Gummy Trouble! to oblivious and silly Kart Chaos! to irritable and belittling. The Strangers from the Stars

Gummy Trouble!
Squirk noted a Geyser is about to explode and call the Super Moshis that they will help out.

Comic: Kart Chaos!
The Zoshlings are at the tracks waiting to go karting with Katsuma. Squirk along with the other Zoshlings start to consume their karting tickets, thinking that is what they are supposed to do with them. Furi who was supposed to take their tickets lets them through anyway and they meet up with Katsuma in the changing room. They are having some complications dressing themselves.
Being slightly unsure of ability after their "training", Squirk agrees to have a race with Katsuma, along with the rest of the Zoshlings. Katsuma who thinks to win easily is outsmarted as the Zoshlings are already at the finish line, crossing them vary particular individually. Captain Squirk enters by driving backwards. Standing together with his crew on the First Place spot he declares Karting to be fun with Katsuma being a bit upset on the Second Place spot.

Story: The Strangers from the Stars
For unknown reason, the Rhapsody 2 malfunctions and crash lands in the Gombala Gombala Jungle. (again) Leaving the ship because it is out of power in search for help

Unlike any other occassions Captain Squirk was written, he appears rather irritable, spouting insults under his breathe towards Dr. C. Fingz

3-Panel Comic
Captain Squirk ask First Officer Ooze how he experienced the moon party on which Ooze ends it with the punchline that there was just no atmosphere.
Toasty's Tune!
Captain Squirk thanks Toasty for getting the melody right to start up the ship's engines.

17 - Big Top Ballyhoo I contacted the Super Moshis after the ship's transmitter picked up a signal indicating a crewmember had been detected! When Ooze turned up with a poster for the Cirque du Bon Bon, I could barely believe my eyes. Dr. C. Fingz is working at a circus as The Great Zoshlingo? Never in all my light years did I think I would see such a thing!

In the in-game Missions, they were given short-lived employment to help fix the Rhapsody 2, but Hubbs pressed the launch button before Super Moshi could leave the ship. They weren't seen through the missions leading up when Dr. Strangeglove took over the ship as they went into hiding. They only appeared again on the C.L.O.N.C. mothership where they help you proceed within the base.

It is unclear if Squirk knew of their "past" but the quickness of hiring them shines a light to Squirk having somewhat of a naive nature.

Retrieved from "https://moshimonsters.fandom.com/wiki/Captain_Squirk?oldid=284096"
Community content is available under CC-BY-SA unless otherwise noted.