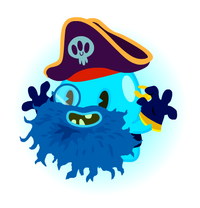 I've not seen a haul like that since I found the wreck of the Fat Falcon in Bottomy Bay!

The Curse of the Paw Wavin' Kitten

Main
As the Gooey Galleon's spooky skipper, Captain Codswallop doesn't let a teeny thing like being dead stop him from barking orders. If only he hadn't been so greedy, looting booty on Hong Bong Island, he wouldn't be stranded in the first place. But that's what happens when you're smitten with a paw wavin' kitten who just so happens to be cursed!
The Gooey Galleon
Although the Galleon is rarely seen, curious critter Gail Whale has reported several sightings of the ship and its gooey crew out on the Seventy Seas. Eerie Codswallop can often be seen haunting its private quarters.
Gross ghost!
Eurgh! Grab a peg for your nose because Captain Codswallop is infamous for his terrible odour. Pirate legends tell of his fuzzy facial fur as the source of the disgusting stench. Some believe that his beard is made from enchanted seaweed, while others think it's actually rotten cabbage stuck on with fish paste. Yuck!
Data File

Captain of the Gooey Galleon, this crazy buccaneer was once the scourge of the Seventy Seas. Some say his facial fuzz is made from enchanted seaweed, others say it's rotten cabbage stuck on with fish paste. Either way, it stinks. Aaaaarrrrr!

The Daily Growl: Best known for: Facial Fuzz. Some say it's made of enchanted seaweed, other say it's rotten cabbage stuck on with fishy paste!

The first mention of the Captain is through Jaunty Jack who mentions to be called by his Captain, while not seen or heard.

When meeting the Captain for the first time, he will not let you leave without having supplied him with a full course meal, which so happens to be lying around in his cabin on random places. He does not ask nor care about your reason of being here, even if Jaunty Jack would have likely told him.

Captain Codswallop is an aqua-blue ghost who features a sizably voluminous beard, a pirate hat, fingered gloves, a monocle, an earring and a belt.
In his cabin, you can find his skeleton. His remains wear a slightly differently-designed captain's hat, a red coat, diving boots with pink socks and is equipped with a blue ukulele.

He and other crew members from the Marooned Five; found in Jaunty Jack's Shouty Shack

His room and skeleton

Retrieved from "https://moshimonsters.fandom.com/wiki/Captain_Codswallop?oldid=271504"
Community content is available under CC-BY-SA unless otherwise noted.