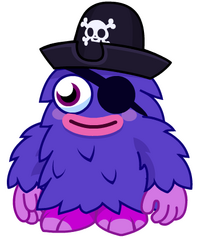 This reminds me of a similar mysterious situation on the Seven and a half Moshi Seas!

Captain Buck E. Barnacle, better known as Cap'n Buck, is a pirate bearded barnacle, which are a species that look similair to Furis, and a significant character in Moshi Monsters. He sells the treasures that he has collected on his ship, the Cloudy Cloth Clipper.

He has an enormous family of which his cousin, Baz Barnacle, sells Buck's old treasures without Buck knowing.

As a pirate, he travels the world seeking treasure. He has a habit of leaving bottled notes with riddles. The riddles indicate in what places he's been.

He often appears in the missions with varying degree of importance because he functions as a comical character and appeared for visual gags.

Main
Ahoy me hearties! Meet Monstro City's top pirate, Captain Buck E. Barnacle. This barnacled beauty had a troubled start in life after losing both parents in a tragic shipwreck. A school o Batty Bubblefish took him in and raised im as their own - no wonder old Buck is completely barmy!
All paws on deck!
Cap'n Buck and his crew sail Potion Ocean in search of treasure on their ship, the CloudyCloth Clipper. They come to The Port to sell their exciting finds. including bubble machines and marshmallow pillows.
A pirate's life
After the shipwreck, Cap'n Buck drifted out to sea. He met lots of kind and interesting sea critters, including one-eyed Lefty, who became his flood brother (or best pal). Together, they hatched a plan to become pirates. They built a ship, assembled a crew, brushed up on their pirate lingo and set off on a life of piratey adventure!
Data file
Locaton: Potion Ocean
Job: Captain of the CloudyCloth Clipper
Likes: Collecting huge piles of loot, leaving messages in bottles
Notes

Orphaned by a terrible shipwreck, Cap'n Buck was raised by a school of Batty Bubblefish in Potion Ocean. Unable to quell his sailing urges, Buck returned to a life of piracy, captaining the Cloudy Cloth Clipper and collecting booty from places like Bubblebath Bay and Candy Shoals.

In Voyage Under Potion Ocean, he helps you save the Fishies from Dr. Strangeglove by sailing you around three small islands on the Potion Ocean which allows you to find the underwater lair.

In Spooktacular Spectacular, he is one of the attendees shown on Simon Growl's party. Other attendees shown are Buster Bumblechops and Tamara Tesla. Only very well-known people were allowed on Simon's party, which Cap'n Buck naturally is.

In Snow Way Out! he can be found on Mount Sillimanjaro when Gabby melts the snow layering on top of face while he's body deep in snow. He says the last thing he remembers was sailing through the Blearghmuda Triangle. Upon interacting with him once more, he says to not worry as he can get himself out. At the very end of Season 1: Mission 10: Super Weapon Showdown, during the weapon launch countdown, he is still shown to be stuck in snow and his unbothered expression.

The intro video of the Season 2 Missions have him appear in the fast-skipping character roster, giving a prominent moment therein as a gag as he is upside down and in retrospect as he plays absolutely no role in Season 2 aside a comical cameo when using Tamara Tesla's telescope in The Observatory to find the Crash Spaceship. He is floating in space, in orbit with something unclear and frozen stiff. Tamara Tesla states in the Magazine she does not know what he is doing there.

Lost in Hong Bong centers around Captain Buck as he is missing and requests rescue. He claims to be abducted and has left riddles on notes, likely with the help of Wobblesan. He was somehow shrunk to a minimal size and stuffed into a bottle with his boat, crew and a bit of seawater. You use First Officer Ooze's ooze to turn him to his original size. How he got his boat back in the waters or how any of this even happened all remains unawnsered. Story line wise this takes place somewhere in season 2, as the Marooned Five appear in it and the Zoshlings are still accompanied with a broken Rhapsody 2.

In Moptop Mishief, he is cosplaying as Zack Binspin's teddy bear but trades it with the Super Moshis for a signed photo of Zack.

Moshis vs Ghosts The second house is Buck's houseboat, which he has locked down because ghosts were running amok in it, and has throw the key in the "ocean". He takes his leave afterwards, hoping the ghosts just disappear or something. The home is in a rather disastrous state which is not further explained.

On Buck's travels, He has received several postcards from several Monsters. Below are postcards that are known to be sent.

It's so busy in the Observatory. I programmed my computer to generate this line to wish you bon voyage! My mubble space telescope checked the alignment of the stars - There are storms around Tiki Tropic but the rest of the route to Pirate Paradise should be plain sailing!

To my old pals Buck and Lefty,

I can't tell you how roarsome I think this new mission sounds! I haven't seen Pirate Paradise since I was a wee furry thing, Holidaying with my Musky Huskies. Make sure that you fill the hold with as many treasures as you can find. There's always plenty of room for trinkets, charms and curiosities in the Bizarre Bazaar!

When Roary told me that you were heading off on the seventy seas again I dashed down to the Port to wave goodbye. I assumed you'd want me to smash a bottle of vintage Toad Soda against the Clipper, cut a ribbon and pose for farewell photos, but by the time I got there you had GONE! I can only assume, sniff, that there was a technical hitch. Perhaps you'd like to explain when you're back in the Port..

After return from Candy Shoals, photo taken by Roary

Read It Yourself: Poppet Stows Away

Cap'n Buck's Ship In A Bottle

Retrieved from "https://moshimonsters.fandom.com/wiki/Captain_Buck_E._Barnacle?oldid=271548"
Community content is available under CC-BY-SA unless otherwise noted.