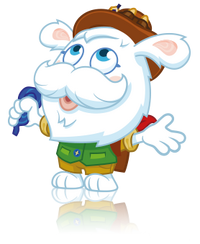 If you stand for nothing, you'll fall for anything!

Buster Bumblechops is Monstro City's greatest Moshling collector and expert, thus a Moshlingologist. He keeps all his Moshlings in a secret ranch, named 'Buster's Ranch'.

Main
Introducing the ultimate Moshling expert-in-residence! What Buster Bumblechops doesn't know about these cute little critters is not worth the icky flypaper it's written on. Visit Buster's secret ranch - if you can find it!
Master of Moshlings
Bumblechops started collecting Moshlings using the journals of his great uncle, Doctor Furbert Snufflepeeps. The legendary Moshlingologist vanished mysteriously in the Gombala Gobmala jungle. After mastering the three "C"s (camouflage, chase, catch), Buster learnt how to nab even the rarest of critters.
Moshi-tabulous missions
Studying Moshlings often takes Buster to the depths of Potion Ocean and beyond. His watery explorations include being glooped by Battly Bubblefish and blowing bubbles with Songful Seahorses!
Data File
Habitat: The great outdoors
Often Spotted: Lurking in the bushes
Assistant: Snuffy Hookums
Enemies: Dr Strangeglove, C.L.O.N.C
Notes:

Brainy Buster!
There's not much super-collector Buster Bumblechops doesn't know about Moshlings. He's the guy to ask any Moshling-related questions like: "How do I catch a Warrior Wombat?" and "Help, I'm being chased by a Psycho Gingerboy!"
Awesome Explorer!
Buster's quest to find every Moshling has taken him all over Monstro City - from the summit of Mount Sillimanjaro to the bottom of Potion Ocean!

Buster was definitely born to be a Moshling hunter. Here he is aged 3 1/4 riding a Silly Snuffler! Accompanying image

No one knows the location of Buster's ranch. It's TOP SECRET! Shh..!

Buster is a white-haired rabbit-like monster, with bulging blue eyes and a bold moustache. He wears a hat with what appears to be animal tranquilisers circled around it, a typical piece of headgear for explorers. He is often seen carrying an azure walking stick, a sign of old age, and his small body appears clad in an office green overall, a brown t-shirt beneath it. He also wears a backpack in a similar fashion to the brown t-shirt, as well as a red scarf.

As Buster is the representative on everything there is to know about Moshlings, he has had a big role in many content based merchandise.

The Buster's Lost Moshlings: A Search-and-Find Book is an activity book much like the well loved series of "Where's Wally", as fans have to search and find certain characters. The book comes with a code for a Moshling, Blingo.
Later on, the book was translated as an app: Buster's Lost Moshlings. An additional concept to the digital media is that the found Moshlings are collected in the app's Moshling Zoo.

A Close Encounter of the Zoshi Kind

Go Do The Hoodoo

Main article: Go Do The Hoodoo 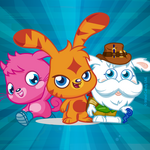 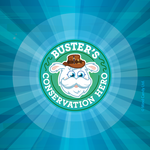