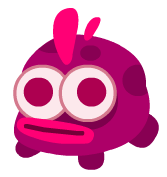 Bug is a bouncing insect that featured in Bug's Big Bounce.

Bug is considered a wild animal due to his lack of looking like a Moshling or being a Moshling and the fact that he lives in the wild. He is featured in a show on Moshi Monsters called The Adventures of Bug and Ratty.

Bug's best friend is Ratty and can be seen bouncing on Main Street.

Bug is Ratty's partner in crime. They are almost inseparable and always up to mischief - although never as naughty as any Glump or C.L.O.N.C. agent. Bug is a prankster and loves practical jokes.
If he's not causing chaos in one of Monstro Cities public places, he's usually stocking up on stink bombs and itching powder.

Main
Bug is his name, backflipping and bugging monsters in his game! It's best not to mention Bug around Colonel Catcher, the flutterby collector, because he has to put up with Bug's annoying antics every day. Just as the Colonel is about to close in on a rare flutterby specimen, boisterous Bug backflips in his net, scaring away the prey. What a bothersome Bug!
Best Furry Friend
Bug has a loyal friend in his BFF, Ratty. The rascally rat often gives his buddy a piggyback when Bug's short legs are tired from his mischievous antics.
Museum mayhem
Bug and his pal Ratty go together like gooberries and ice-scream sundaes! Last year they hit the headlines of The Daily Growl when they were caught red-handed jumbling up the dinosaur bones over at the Unnatural History Museum.
Data file
Often spotted: Flutterby Field and up to no good all over the City
Best Furry Friend: Ratty
Likes: Causing mischief
Notes

Bug appears as a small, purple, hence the name, bug. He has eyes like saucers and is coated in spots. Additionally, his feet are circular and has wide antennae. He is exceptionally versatile and swift and is described to annoy bug catchers - such as Colonel Catcher - on a daily basis. 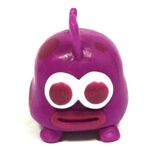