Broccoli Spears is a character in Moshi Monsters and a parody of Britney Spears.

As mentioned in Moshi Magazine, Dustbin Beaver is a fan of Broccoli and would duet with her.

There's a poster of her available at Horrods that describe Broccoli as "She's the vegetable with additude. No more Baby One More Floret for her!"

Her song, "Peppermizer", appears in The Underground Disco (Game).

She once chopped off all her florets, but when they started calling her StringBean Spears, she had to get floret extensions.

Oops, she did it again! Yes folks, Broccoli Spears is the pot-bound veggie vocalist who's constantly baffling fans with her *ahem* strange behaviour. Just last week she shocked the world by chopping off her florets and appearing at an in-store signing dressed as a cauliflower!

According to her manager, she was "exhausted" following a night out with her popstar pal Celery Gruff, but critics think she could be heading for another meltdown, and that's bad news because miming along to smash hits like "Boil Me Baby One More Time" and "Fertilizer" isn't easy when you're a soggy mess.

Broccoli Spears is a broccoli of which the flower-head, her visible body, sprouts from a brown pot with a white star on it. Her hands and the top of her head are florets. Her arms are stems which causes her to remain in a shrugging position. She has turquoise eyes, lime green lips, and a yellow-green tongue. She wears a glittery purple strapless top, purple bracelets, holds up a microphone and is planted in a flower pot with a pink star on its base. 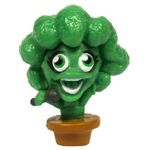 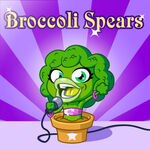