Bonnie the Sassy Lassie/Hoxy Foxy is an ultra-rare Moshling in Moshi Monsters. Bonnie is a fox wearing Western attire. They love lassoing critters and singing songs.

Bonnie did not see a release inside of the original online game. They instead made their obtainable debut in Moshi Monsters Egg Hunt where they can be obtained by daily egg hatching.

Say howdy doody to the whip-cracking Moshlings that love yeehah-ing their way around the world of Moshi. When they are not lassoing critters on Skedaddle Prairie or keeping the peace on wild frontiers, Sassy Lassies love singing rootin’ tootin’ songs and slamming shots of wobble-ade in the Sloppy Saloon.

Go west and you might see a few Sassy Lassies cracking their whips on Pokeback Mountain. 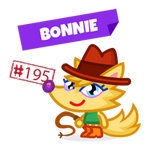 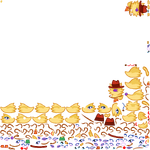 Retrieved from "https://moshimonsters.fandom.com/wiki/Bonnie?oldid=271996"
Community content is available under CC-BY-SA unless otherwise noted.