Bobbi SingSong is an actor, singer, dancer and musician renowned especially in Jollywood, where he lives. Alike Missy Kix, this already-famous talent reached Simon Growl and he agreed to be on the Music Rox! album.

In Moshi Monsters: The Movie, he aids the main characters in obtaining one of the artifacts; "The Blue Jeepers Tears" and helps them Kerfuffle to their next destination on Mount Sillimanjaro.

A legend in his distant homeland, this Moshling's smash hit song 'Welcome To Jollywood' has been adopted as Jollywood's national anthem. When he's not trying to remember his mantra, Bobbi enjoys dodging potholes in his fancy rickshaw. Jolly good!

If you've never been to Jollywood (it is jolly good) chances are you've no idea how famous Bobbi SingSong really is. A legend in his distant homeland this Moshling gooperstar's smash it 'Welcome to Jollywood' has even been adopted as Jollywood's national anthem. If only he could remember his mantra! Despite his fame, Bobbi drives everywhere in his own luxury rickshaw - and I should know because he recently took me for a spin. It was great fun- until he started to show me that 'judder sideways' move of his. We nearly ended up in a pothole. Goodness gracious me!

Habitat
Jollywood of course, but Bobbi should be coming to a town very near you!
Personality
Jolly, doolally, hyperenergetic.
Likes
Meditating and playing his sitar.
Dislikes
Wobble-ade and dilly-dallying.

Main
Coming soon to a town near you, singing sensation Bobbi SingSong! This big-haired, moustachioed gooperstar is taking Jollywood by storm with his melodious crooning and monsterific sitar playing. His hometown has paid him the highest honor by adopting his smash hit "Welcome to Jollywood" as its national anthem!
Rickshaw rider!
Life in Jollywood is jolly good. Gooperstars cruise the hills in their limos. But Bobbi's no diva--he'd rather rattle around in his own rickshaw.
Tranquil tune
Hyper-energetic Bobbi tries to relax before a gig by strumming on the strings of his sitar and meditating. Perhaps he should write the word to his mantra down, though, because he keeps forgetting them!
Data file
Moshling type: RoxStar
Species: Jollywood Singalong
Habitat: Jollywood
Celebrity pal: Zack Binspin
Notes

If you've never been to Jollywood (it is jolly good) chances are you've no idea how famous Bobbi SingSong really is. A legend in his distant homeland this Moshling gooperstar's smash it 'Welcome to Jollywood' has even been adopted as Jollywood's national anthem. If only he could remember his mantra!

With his smash hit 'Welcome to Jollywood' which, incidentally, is jolly good, Bobbi SingSong has found fame. With Jollywood having adopted his number one as their national anthem, he has become a living legend in his homeland. When he's not meditating, he mostly whoops it up with his sitar. Just don't offer him a glass of Wobble-ade or suggest any dilly-dallying! 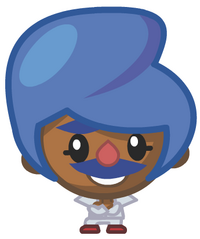 I just remembered my mantra!

One step here & One step there

Finger Up & Twitch your Neck

Bobbi SingSong is an all-around Gooperstar; a singer, dancer, actor and musician. He does not let fame gets to his head by practicing relaxing yoga and trying to be among the normal crowd by walking around incognito and preferring a regular rickshaw above a limo. He does take pride in his success and likes to let people know who he is.

He is naive, putting absolute trust in Big Chief Tiny Head as his mantra guru, and forgetful as mentioned in his biography where he cannot remember his mantra.

In the Movie, Poppet runs into Bobbi SingSong, not recognizing him regardless if he is incognito or not. Even before informing them he is incognito - as Katsuma questions his fame - Bobbi declares his many successes to the strangers.

After switching out his eyebrows and moustache and being recognized by the Jollywood crowd and getting some autographs done, Poppet asks him about the whereabouts of a Blue Jeepers. He speaks they are very rare but knows they love singing and dancing - "then again, who doesn't?" - and proceeds to get the whole of Jollywood to perform the anthem Welcome to Jollywood in which the cast manages to find a Blue Jeepers. Katsuma's clumsiness gets it to cry of laughter and for the main characters to obtain their sought Blue Jeepers Tears.
Next up, the main characters need to venture to Mount Sillimanjaro and Bobbi suggest they Kerfuffle themselves, which is a trans-like magic that can teleport one to their desired destination. When Bobbi performs his Kerfuffling, it seems it is Blue Jeepers who casts a spell with their sitar to teleport them. This does not go as planned, unbeknownst to them, as Furi disrupts the focus and ends up teleporting directly into the Scare Force One jail, while the remaining cast ventures to an outskirt of Sillimanjaro.
At the end of the Movie, Bobbi and Blue Jeepers kerfuffle to the grand opening of the Moshling Sanctuary and the hatching of The Great Moshling Egg. They are later on stage together with Zommer, who repeats Blue Jeepers' sitar performance on his own electric guitar. Bobbi compliments it but it's still not a sitar.
In the end credits, Bobbi is shown on one of his many movie covers, depicted as Rambo.

In the quest saga Moshi Gooperstars: Build-A-Band, Bobbi SingSong is one of the four characters.

He is performing with Zack Binspin and Missy Kix in Read it yourself: Furi on Music Island

Bobbi SingSong and Blue Jeepers havea rather vague relationship as the characters are not shown to directly interact. Blue Jeepers is a florist on the market of Jollywood who knows about Bobbi's secret yoga retreat. The doorway also depicts Blue Jeepers.

When Bobbi performs his Kerfuffling, it seems it is Blue Jeepers who casts a spell with their sitar to teleport them. At the end of the movie, Blue Jeepers teleport Bobbi SingSong and his ride at the grand opening of Buster Bumblechops' Moshling Sanctuary (although it looks more like Blue Jeepers changes INTO Bobbi). Later on, Bobbi and Blue Jeepers perform a gig with Zommer on Ooh La Lane. Blue Jeepers shows off their skills on their sitar and Zommer shows off his skills on his guitar. Bobbi compliments Zommer's skills but has one complaint: that's not a sitar.

Tiny Head was Bobbi's personal guru and brought him "wisdom". Bobbi was shocked to learn his guru was a fraud all along and immediately confronts him and wants to settle it.

They are rather familiar with one another in speech as Tiny Head calls him "Silly Bobbi" and knows that with settling it Bobbi means a dance off. Tiny Head is reluctant to dance and comes up with excuses to buy time.

In Bobbi's biography, he states to dislike alcohol, specifically Wobble-Ade, whilst Tiny Head is an avid drinker.

Retrieved from "https://moshimonsters.fandom.com/wiki/Bobbi_SingSong?oldid=281163"
Community content is available under CC-BY-SA unless otherwise noted.