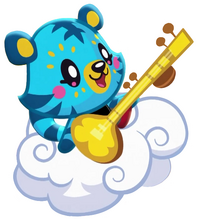 What did you do to my flowers?

Blue Jeepers the Snuggly Tiger Cub is a Jollywood character in Moshi Monsters.

They feature on the title card of Welcome to Jollywood and are the first person from Jollywood to talk to you, congratulating you on finding the secret entrance to Bobbi SingSong's Yoga Retreat. Upon your confusion, Blue Jeepers explain that Bobbi SingSong is a superstar who tends to take breaks from stardom in this retreat. But they assume this is as far as you get.

For your way in the quest, Blue Jeepers allows you to take their blue flowers which they grew. They are very proud of it and react in panic when you expose the plant to spices that turns it red.

Shown once you remove Bobbi SingSong's poster to reveal his Yoga Retreat, the door depicts a sad looking Blue Jeepers. If you show to have good rhythm in the minigame Groovy Gateway, the Blue Jeepers face will look delighted and the door will open.

In the movie, their role switches to being a non-verbal elusive demigod-like persona. Their tears are one of the required artifacts demanded by Dr. Strangeglove. Bobbi explains Blue Jeepers are "very rare" but happens to lead Poppet and Katsuma to one while performing his song. Blue Jeepers opens one eye and shows their trickster habit by teleporting in different spots and floating about on their cloud. The Monsters are unsuccessful in capturing them but obtain their tears once they burst out of laughter when witnessing some slapstick clumsiness of Katsuma.

Their relationship to Bobbi SingSong remains shown in the same vagueness, as the characters are never shown to directly interact. When Bobbi performs his Kerfuffling, it seems it is Blue Jeepers who casts a spell with their sitar to teleport them. This does not go as planned, unbeknownst to them, as Furi disrupts the focus. 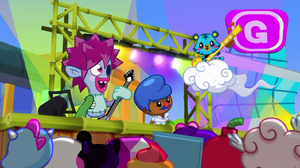 At the end of the movie, Blue Jeepers teleport Bobbi SingSong and his ride at the grand opening of Buster Bumblechops' Moshling Sanctuary (although it looks more like Blue Jeepers changes INTO Bobbi). Later on, Bobbi and Blue Jeepers perform a gig with Zommer on Ooh La Lane. Blue Jeepers shows off their skills on their sitar and Zommer shows off his skills on his guitar. Bobbi compliments Zommer's skills but has one complaint: that's not a sitar.

As their name suggest, they are a blue Snuggly Tiger Cub. On the title card, several Blue Jeepers are displayed. They have yellow markings surrounding their eyes, which is not incorporated within the mission but is present in their movie design.

In the movie, they feature with a golden sitar and a cloud which they sit upon. This cloud is a direct reference to mythological figure Sun Wukong, or the Monkey King, who could walk on clouds and is often depicted sitting on one. Although a Chinese tale, Sun Wukong's journey takes him to India, so the reference is not necessarily misplaced, despite that Jeepers is a tiger instead of a monkey.

Retrieved from "https://moshimonsters.fandom.com/wiki/Blue_Jeepers?oldid=257703"
Community content is available under CC-BY-SA unless otherwise noted.