Blinki the All-Seeing Moment Muncher is an Ultra-Rare Moshling in the Movies set in Moshi Monsters. They are based on a flying camera. They can take pictures, record videos and project holograms.

Blinki can be obtained by playing the minigame Bug Rush, which can the accessed via the overview screen of The Moshi Movie Mystery quests. After catching a total of 1,200 bugs, he awakens from the totem and flies off to your Moshling Zoo. 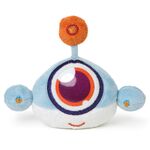 Retrieved from "https://moshimonsters.fandom.com/wiki/Blinki?oldid=269304"
Community content is available under CC-BY-SA unless otherwise noted.