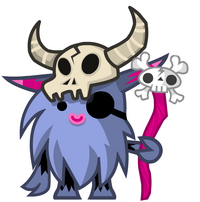 The Sixty-two Guardians of Gombala Gombala Jungle will have revenge, Idol!

Chief of the Woolly Blue Hoodoos

Bungle in the Jungle

Big Chief Bill is the chief of the Woolly Blue Hoodoos tribe. What Big Bad Bill's position is in comparison is unclear.

Bungle in the Jungle
Chief is preoccupied and not in the best mood when meeting Super Moshi (strange one / monster / strange creature), cutting right to "What do you want from Big Chief Bill?" as his intro quote. He is too busy (and grumpy) to chit-chat about the idol, unlike his fellow Hoodoos guarding and worshiping it. He explains that all Hoodoo tribes are having a silly fight and he tries to fix this by having a big party around making Hoodoo Stew. But to make Hoodoo Stew, he is required to fetch the ingredients from the tribes he is in a fight with, so Chief is in a bit of a dilemma. When Super Moshi offers help (or Chief figures you can help him in exchange for info on the Idol and/or Ignition Key) Chief optionally tells Super Moshi why the tribes fell out.

In order to help them, Super Moshi has to prove their worth by winning in an ancient trial of Hoodoo Pongoo.

In the Music Island Books version, he is not as snappy, gladly talks about the Idol and reacts with suspicion when the Super Moshis ask rather specific questions about the latter.

Moshi Movie Mystery
Talking to Chief is the first task in the mission. He says to have seen a round and shiny object (the movie cannister) but the "BEAST stole it", describing said Beast as "huge, hairy and super scary".

Movie
He acts a lot less tolerant than his usual in-game self and only wants to commune through whistling, which was something stated Woolly Blue Hoodoos only do amongst each other, are aware other species don't understand them and adjust their speech to be understood by others.
Furbert Snufflepeeps' notes specifically states they mostly communicate through whistling.

The movie makes it seem like he and the rest of the tribe is incapable of doing so and is offended by others not communing with them correctly. Katsuma's failed attempt at whistling is perhaps seen as an insult.
Without further ado he orders the main cast to be dumped in the cauldron. When Poppet approaches him in whistling, he only allows them to be free if Poppet wins in a game of Limbo versus their very own champion. Upon losing, Poppet is dumped in the cauldron to join her friends. When Zommer suddenly tries to do limbo and orders the bar to be set on the lowest position, Big Chief Bill laughs for it is unbelievable someone would be able to pull that off, to which the rest of the Woolly Blue Hoodoo tribe felt urge to laugh along. He is shocked when Zommer does it by mutilating himself and is so impressed he proceeds to give Zommer applause.
The cauldron is emptied and he gives Zommer the Microwavable Oobla Dooble they sought.

Once Zommer is left behind he is invited back to the village to party. He clings CocoLoco Bongo Colada with the Chief.

At the end of the movie, Big Chief Bill, along with two other Woolly Blue Hoodoos swing on vines towards Zommer, handing him the Electric Guitar he previously jammed on. They bow for him and upon a little bit of reffing in return Big Chief Bill excitedly runs up to Zommer and hugs him.

Varying through fiction, he has been shown to have pride for his tribe and camp. Like all Hoodoos being described as wise, he too has shown to be both sharp and down to earth. However, he has also shown being stubborn and childish in order to avoid having to admit mistakes and taking responsibility for them.

In the Music Island books, he speaks "broken English" in which he forms sentences using little words. Usually done to push a stereotype of tribesmen, Big Chief Bill is the only one to have this habit.

His depiction has changed over time, possibly to make him more distinguishable from Big Bad Bill. The most notable difference in appearance with Big Bad Bill is his skull hat. His markings, coat colour and amount of fur vary.

His staff also varies in depiction, to other it from Big Bad Bill's and other Hoodoo staffs. The skull is more oval shaped and the zap shape crack goes right through the middle. The bone decoration on the side stands out more. Usually shown to be a pink staff like all Woolly Blue Hoodoos, Chief's stick varies to brown as well Movie with pink and blue feather provide decoration.

Bungle in the Jungle

Go Do The Hoodoo

In the credits, with Big Bad Bill and Little Bad Bill

Chief's hut in the background, different from that in Music Video.
Retrieved from "https://moshimonsters.fandom.com/wiki/Big_Chief_Bill?oldid=257700"
Community content is available under CC-BY-SA unless otherwise noted.