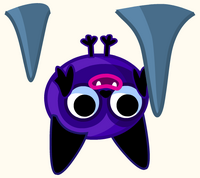 Bats are a type of creature in Moshi Monsters. One made an appearance in the Missing Moshling Egg, providing Bat dropping. The four seen in Moshi Monsters are named Wing, Fang, Screech, and Sonar.

They are seen in dark places like The Underground Tunnels and Dr. Strangeglove's Hideout although they are sometimes seen outside in artwork and books.

Wing, Fang, Screech and Sonar are batty bat siblings who terrifed the monsters of Monstro City so much, they were banished from Ecto's Cave! These frightening flying mammals now like to hang out (upside down) in the Underground Tunnels.
Bat Chat
These scarily chatty batties are always keeping their eyes and pointy ears out for gossip, which they then tittle-tattle to The Daily Growl. Hidden in the dingy tunnels, they're perfectly positioned to overhear monstrously scandalous conversations and whispers!
Going Underground
If you wander deep into the damp Underground Tunnels, you could be in for a webbed-winged surprise. These flying four could flap right into your face! Well, it is dark down there!
Data file
Hangout: The Underground Tunnels
Likes: Chit-chatting, telling tales
Catchphrase: "Have you heard..."
Often spotted: Hanging around
Notes

Exiled from Ecto's Cave after terrifying Monstro City residents, siblings Wing, Fang, Screech and Sonar are the Underground Tunnel's premier bat residents. They keep watch for gossip to report to The Daily Growl.

In Go Do The Hoodoo
Retrieved from "https://moshimonsters.fandom.com/wiki/Bats?oldid=263089"
Community content is available under CC-BY-SA unless otherwise noted.